A NOVEL FROM MEMORY by Sharon Ervin

Please join me in welcoming Sharon Ervin to Discover Yourself today.

Memories of friends from high school can prompt daydreams. Sprinkle in some “what ifs,” and splashes of reality and Voila! a novel is born. At least that’s how MEMORY came to be. Easy peasy.

Blurb:
A woman's mangled body found on the shoulder of a highway is mistakenly identified as Memory Smith. Was she murdered or the victim of a grisly hit-and-run? Assistant District Attorney David "Mac" McCann, knows exactly where Memory is, and it's not lying dead beside a highway. While they investigate rumors and foiled assaults on her person, Memory and Mac stumble across other forgotten, home town mysteries, and become caught up in a little unexpected romance.

Excerpt:
The drizzle became intermittent sprinkles as David drove to the only all-night convenience store in town. He bought a hairbrush, a toothbrush and toothpaste. He glanced at packaged ladies’ briefs, but decided that might be taking chivalry to a tasteless extreme. Donnie Rutherford talked on a cell phone the whole time David was in the store, even kept the device at his ear as he rang up the purchases. With a sense of mission, David drove back to Flanagan's.
Caught up planning his campaign for the siege of Room 107, David heard more sirens. Another accident? Maybe. He’d get details at the office Monday, which would be plenty soon enough.
He rapped on the motel room door several times before Memory, her muffled voice just at the other side, asked who it was.
“David McCann.”
“What do you want?”
“I brought you some things.”
The security chain rattled. There was a brief pause, then the chain rattled again as she reattached it before she released the dead bolt, turned the knob and cracked the door, which opened only as far as the chain allowed.
David tried not to stare as he passed her the sack from the convenience store. All he could see of her was one firm, smooth, bare arm and shoulder, and part of her face, twisted into a frown.
“Give me your wet clothes.” He intended to capitalize on this opportunity, take it as far as he could.
“What? Why?”
“I’ll take them to the motel office. Get Mrs. Flanagan to run them through her clothes dryer. It probably won’t take an hour.”
Memory stared into his face, the almond eyes narrowing. She closed the door and shuffled away, then returned, and opened, again only as much as the chain allowed, and squeezed her denim dress through. It was wrapped tightly as if it contained other clothing.
David smiled. “Be right back.”
“Why?”
“You can’t go get them later wearing a bed sheet and I didn’t think you’d want me to sit in the car for an hour, in this.” He glanced skyward, ignoring the fact the fickle sky was clearing. “Mrs. Flanagan can ring the room when the clothes are dry and I’ll run pick them up for you.” Without giving her time to think of an alternative plan, he took off for the office. 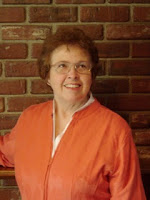 You can connect with Sharon:
Web site: http://sharonervin.com
Facebook: https://m.facebook.com/sharonervin2
Twitter: https://twitter.com/sharonErvin/status/839519653831577600
Email is ervins@sbcglobal.net.
Posted by Brenda Whiteside at 3:00 AM