On Getting Myself Into a Pickle… By J. Arlene Culiner #fearless #travel

My guest today, J. Arlene Culiner, doesn't consider her tale fearless. Oh my gosh, I do! And it's so much fun. You must read on... 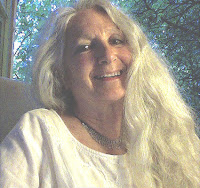 Here’s the question: do I think life will be boring if I stop doing rash things? Probably... So the incident I’m about to relate has nothing to do with bravery or courage. Instead, it’s about being in a pickle — a fairly frequent position in my higgledy-piggledy life. It started like this:

Once upon a time, I found myself in a clapboard, rusty trailer, semi-ghost town in Nevada. The hotel I stayed in was a rundown has-been, where ceilings soared high, and the lumpy, almost colorless wallpaper was a century old. In the shabby bar, a talentless band whined out bad country music, and locals dished up tall tales. It was a singular place, and I’d give anything to be able to go back…

But where was it? Believe me, I searched for it over and over, and never found it again. What was it called? I can’t remember. So I’m still looking for that cranky community — even years later. Which is how I got myself into the pickle I mentioned a few sentences back.

I was on a book tour, making my way from Los Angeles to Oklahoma by bus because, believe it or not, I really like travelling on buses and trains. You get to meet some pretty strange characters — grist for the writer’s mill — as well as highly interesting ones. Long-distance bus drivers have told me some of the best stories I’ve ever heard: they’ve been around; they’ve seen it all. Also, my ecological conscience reminds me that, if I take a plane, I’ll add a significant amount of planet-warming gases to the atmosphere.

On this particular bus, the driver and I chatted about books, about unusual destinations too. I mentioned that I’d crossed whole countries on foot, that I’m ever on the lookout for odd places.
“Well,” he said, “if you want to see an unusual place, get off a few miles from here. There’s a date plantation, a restaurant where you can get a good meal, nothing else. But if you walk north, you’ll find the crankiest, finest community around. I remember it well. It might be what you’re looking for.”

Why not? I was around fifteen hours outside of Oklahoma City: I had time. So, feeling very optimistic, I stepped off the bus and headed for the restaurant — I was starving. Of course I hadn’t asked the driver any normal questions such as — “how far north do I have to walk?” or “is there anywhere to stay in the area?” or “when does the next bus come through?” I always think luck is on my side.

“Restaurant’s closed,” said the waitress as she slopped away gooey crumbs from the counter top.
“Don’t tell me that.”
“Well, it is,” she said with unpleasant satisfaction. She was dying to go home, prop up her aching feet, sit mindlessly in front of a television.
“Okay, then. Where can I get something to eat?”
“She looked at me as if I were very strange. “Out here?”
“Yes… I just got off the bus, you see. The driver mentioned a community not far away. To the north. Walking distance.”
“He said that, did he?”
“He did.”
She harrumphed.
“It isn’t?”
“It’s a pretty big walk.”
“How big?”
“Hours away.”
“Ah. How about a place to sleep? A motel, a room somewhere.”
“Out here?”
“Well, yes…”
“Nothing like that out this way.”
“And out at that community?”
“Doubt it.”
I chewed over the information for a few minutes, then optimism abandoned me. “When does the next bus come through?”
“Tomorrow afternoon. Five o’clock.”

Outside, the sun sank with alarming speed. Now what? I wasn’t about to set off on a night trek. No, I’d just have to find a place to sleep, somewhere safe. Where would that be? I thought of all the hungry cougars, wolves, giant killer ants, and zombies who were waiting for the moon and a victim. I thought of armed, dangerous two-legged cranks who roam through the night. I could hear teeth grinding and saliva dripping. I could see strange shapes. “Cut it out,” I ordered myself (but not too loudly.)

I found a little hollow far from the road, curled into it, pulled all the clothes out of my bag and hoped they would be as warm as a good blanket. I also hoped I would be able to sleep. That I would survive.

When I next opened my eyes, it was early morning. Amazing! Evil had passed me by. I headed north, taking the dirt road over a perfectly empty plain. It was a very lonely road. I didn’t see a living soul, but my imagination conjured up movement and shadows, created strange, unpleasant noises. Still, I kept walking: whatever was going to get me, would get me coming or going.

I reached the community an hour or so later — it wasn’t really all that far. It was a wonderful place. There was a clapboard bar run by two wild ladies; there were old timers and cranks; there was great conversation; there was food and drink; it was — albeit too briefly — home.

“Come back,” people said to me. “There’s plenty of place for you to stay. There are empty shacks.”
“I will,” I answered. I meant it too.

But I haven’t returned. Not yet. Will it be as wonderful as I remember? Who knows? What I have done, however, is mix it together with that first community, that rusty trailer, semi-ghost town in Nevada. Together, they’ve become a delightful fictional community called Blake’s Folly. It’s the setting for my newest contemporary romance, Desert Rose. And it really is worth a visit. 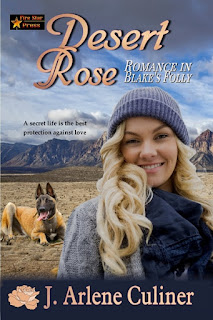 This place was a rusty trailer, scrapyard, abandoned car, clapboard shack, sagging old house community: a dead end if there ever was one. This was nowhere. This was the end of the line, socially speaking. This was a has-been. This was home.

You can find J. Arlene and all of her books HERE.
Posted by Brenda Whiteside at 12:30 AM