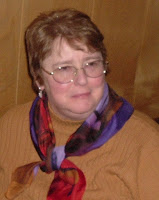 Please join me in welcoming Dee S. Knight with some fearless fun. Remember that first fearless adventure you had? Dee shares hers with us. So read on and enjoy. You'll find out her heroine is fearless too.

When I was just shy of my 18th birthday, I hugged my mom and dad goodbye in Orlando, Florida and stepped onto the train that would take me to Fredericksburg, Virginia for my first day of college. I’d never been away from home before—except for hospitals where I’d had surgery due to polio. I’d never traveled alone before, never been on a train or in a taxi. I’d never visited or even seen the school I was going to attend or ever been in Fredericksburg. I didn’t know anyone else going to my school. I'd never been separated from the familiar.

Still, I was fearless.

I was bound for adventure and new sights, new friends, new freedoms. With the typical selfishness of youth, I didn’t give very much thought to the fact that my parents had just sent their only child thousands of miles away and how they might feel. I knew I would miss them and that they would miss me, but I was consumed with excitement and looking forward to discovering the unknown.

As an only child I wasn’t especially attuned to adventure. I’d led a very sheltered life. My dad was in the Navy. We had moved to Orlando the summer between my junior and senior year, so I didn’t feel a strong kinship with the city, my high school, or any friends I’d made in that one year. The separation from lifelong friends and a city I loved had taken place the previous summer, when we left Virginia Beach.

The train trip was interesting. I was able to sit back and watch the scenery change from Florida, to Georgia. Through the Carolinas, and then into Virginia. As soon as we crossed the Virginia line my heart lightened. Not only was I going to the school of my choice—Mary Washington College of the University of Virginia (now Mary Washington University—no longer an all-girls’ college and now separate from UVA)—but I was once again in the same state with my sweetheart, Jack. Going back to Virginia for school had nothing to do with the fact that Jack was also going to school there (in Lexington, hours from Fredericksburg, but in the same state, at least). Nothing. But it didn’t hurt. 😉

Fredericksburg, when I first saw it from the train station and then from a taxi, had that old-ish, brick, historic patina. I had no idea what to expect. The most I knew about the college or the town was what I had seen in the college catalogue. But it didn’t matter. I was fearless, remember? As it turned out, the campus was exactly as I’d imagined a college campus should look. My dorm was just what I would have wanted. I made friends right away (one of whom is still my best friend), and I was perfectly right to be fearless in my move into adulthood.

Going away from home wasn’t the only fearless thing I’ve done, just the first. I jumped into truck driving when I had no knowledge of or experience in the field. I left trucking for a new, unexplored field a few years later, and eventually dove into writing when I had no idea what I was doing. Sometimes being fearless is only a form of naiveté or stupidity. But for me, being fearless has led to a fun and exciting life. 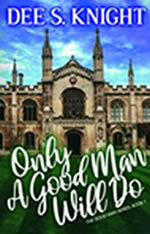 In my book Only a Good Man Will Do, Daniel Goodman has always taken the safe route. He knew what he wanted, he plotted a path to get there, and he stuck to it. Eve Star on the other hand, took leaps of faith. She faced life fearlessly—and eventually won! But the trip wasn’t always easy.

Blurb:
Daniel Goodman is a man on a mission. He aims to become headmaster of Westover Academy. For that he needs a particular, special woman to help him set high standards. Into his cut and dried life of moral and upright behavior, comes Eve Star, formerly one of Europe's foremost exotic dancers. Her life is anything but cut and dried, black and white. Daniel is drawn to her like a kid to chocolate. Nothing good can come of this attraction. Or can it? He is after all, a good man.
Author info:

Bio:
A few years ago, Dee S. Knight began writing, making getting up in the morning fun. During the day, her characters killed people, fell in love, became drunk with power, or sober with responsibility. And they had sex, lots of sex. Writing was so much fun Dee decided to keep at it. That's how she spends her days. Her nights? Well, she's lucky that her dream man, childhood sweetheart, and long-time hubby are all the same guy, and nights are their secret. For romance ranging from sweet to historical, contemporary to paranormal and more join Dee on Nomad Authors. Contact Dee at dsknight@deesknight.com.
Author links:
Website: https://nomadauthors.com
Blog: http://nomadauthors.com/blog
Twitter: http://twitter.com/DeeSKnight
Facebook: https://www.facebook.com/DeeSKnight2018
Goodreads: https://www.goodreads.com/author/show/265222.Dee_S_Knight
Newsletter (sample): https://preview.mailerlite.com/o2g1i0?fbclid=IwAR0COlyuPY-Hu30KTBdT092j_GZeuN5z4pc1LtsvHTyr6IbiSpsGqeIgT90
Amazon: http://www.amazon.com/-/e/B079BGZNDN

Email ThisBlogThis!Share to TwitterShare to FacebookShare to Pinterest
Labels: Dee S. Knight, Discover..., Fearless Friday, Only a Good Man Will Do, romance