Please welcome M.S. Spencer to Discover... Ms. Spencer loves the traveling life as much as I do. But it sounds like she's discovered a few more places. Fearless adventure. Enjoy!

My traveling life began at the age of six months, when my family moved from upstate New York to North Carolina. From there we went to Maryland, and four years later were winging our slow way halfway across the world to Turkey in a Boeing Stratocruiser, complete with sleeping berths above the seats, and gourmet meals served with china and crystal. When I was ten, we took the Queen Mary across the Atlantic to France. After two and a half years in Paris, we drove through France, Andorra, and Spain to Gibraltar and Morocco. Our return trip to America was on the sister ship of the Andrea Doria (once as famous as the Titanic for its spectacular sinking)—and yes, we did run into a major storm!

I once counted up the number of significant moves in my life…and stopped at twenty-five. I have lived or traveled in Europe, the Middle East, Africa, the US, Central America, and South America. I’ve wandered the Pere Lachaise cemetery and laid a flower at Oscar Wilde’s grave. I’ve eaten Sacher Torte in the Hotel Sacher in Vienna. I’ve climbed the narrow steps of the stepped pyramid of Kukulkan at Chichén Itzá. I’ve seen the Peacock Throne in the Golestan Palace in Iran and ridden a stallion across the Egyptian desert under the “nose” of the Sphinx. I’ve swum with pink dolphins and gone fishing for piranha. I’ve watched as thousands of migrating cranes land on my roof on a hill in Istanbul. I’ve even begged for cigarettes from the sailors on a battleship in the Port of Tangier.

It’s been an adventure.

My romantic suspense novel Lapses of Memory incorporates bits of those adventures, or uses impressions I have of the exciting events occurring during those years. It follows the exploits of two journalists, Sydney Bellek and Elian Davies, as they travel the globe reporting on various world catastrophes. The first time they meet is as children aboard the very same Boeing Stratocruiser I took at age four. Every few years after that they cross paths—in places I’ve been and during events that I lived through, such as Cairo before the October War, the initial stages of the Iranian revolution, and during the Lebanese civil war.

I write from experience. But that only takes the reader so far. We need more than a travelogue—we need a little romance knitted in. So, while you’re eagerly awaiting my memoir, you might enjoy Lapses of Memory. 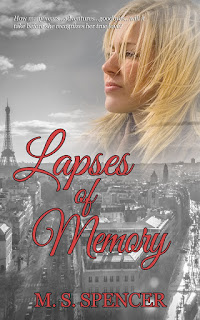 Sydney Bellek first meets Elian Davies in the 1950s on a Boeing 377 Stratocruiser when she is five and he is seven. They run into each other every few years after that, but while he knows from the start that she is his true love, she does not. Later, as rival journalists, they vie for scoops on international crises from the Iranian revolution to the Lebanese civil war. The handsome and intrepid Elian beats her out at every turn, even while keeping his love for her secret.

Only after years of separation does she finally realize they are meant to be together, but this time, in a twist of fate, it is Elian whose memory of her is gone. Will he remember her before she loses heart or will their new love be enough to replace the old one?

Although M. S. Spencer has traveled in five continents, she spent the last thirty years in Washington, D.C. as a librarian, Congressional assistant, speechwriter, and non-profit director. She has two grown children and a perfect granddaughter. Ms. Spencer has published twelve mystery/romantic suspense novels, and currently divides her time between Florida and Maine.

My calendar of events can be found here:
Romance Books 4 Us: http://www.romancebooks4us.com/M.S._Spencer.html