Please welcome Margaret L. Carter to Muse Monday. Demons, spirits, and Japanese folklore. What a fascinating trip her muse has sent her on. Read and enjoy!

The Japanese word “yokai” can be translated as monster, demon, spirit, or other variations  of similar concepts. Not directly equivalent to any English word, it can also apply to ghosts, transformed humans and animals, minor gods, and many unclassifiable strange phenomena. “Demon” is misleading because it implies evil, and, although some yokai are malevolent and dangerous, many aren’t. Some are neutral toward humans, merely mischievous, or even benign.

Some well-known yokai often met in popular culture include kitsune (fox shapeshifters), tanuki (“raccoon dogs,” who, in their supernatural incarnation, have powerful shapeshifting abilities and a reputation as tricksters), tengu (crow-like people), kappa (water-dwelling goblins, often malicious), and spirit cats like the one in my novella “Yokai Magic.” Travelers should beware of demonic wolves that prowl on lonely roads or the yuki-onna, the seductive, lethal woman of the snow. Much more bizarre entities lurk in Japanese folklore, however. For instance, child ghosts called makuragaeshi are mainly known for flipping pillows, although they sometimes flip people around or sit on and suffocate them. The karakasa kozō looks like an umbrella that hops on one or two legs, has a single large eye, and sneaks up on people to lick them with its long tongue. Some ordinary household objects come to life after a century of existence. Called tsukumogami, they chastise owners who waste or damage them. The ittan-momen, a living roll of cotton cloth, tries to smother its victims. There’s even a creature, the akaname, whose sole purpose is to clean bathrooms. In Japan’s animistic traditions, you can find a yokai for almost anything.

Here’s one encyclopedic source of information about yokai:
http://www.yokai.com”>Yokai.com

Wikipedia has an extensive list:
“https://en.wikipedia.org/wiki/List_of_legendary_creatures_from_Japan”>
Legendary Creatures from Japan 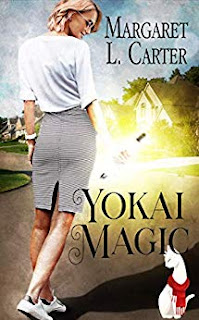 When Val unearths a Japanese scroll and a cat figurine inherited from her grandfather, magic invades her world. The statuette, actually a cat spirit named Yuki—a yokai—enchanted into that form for her own protection, comes to life. Over a century ago, an evil magician cast a curse on her, and a wolf-like demon conjured by the curse still hunts her. Because Val is the one who broke the protective spell, that dark magic endangers her, too. She must turn for help to the last person she wants to get involved with, her former high-school boyfriend, now an officer in the Navy. Together they search for a way to vanquish the threat from the spirit realm, while facing the attraction they thought they’d long since put behind them.

“Toby, are you in there?” Val shuffled into the bathroom. No sign of the cat or any other living creature. She jumped at a noise from behind the shower curtain. Not a rustle so much as a slither.
The plastic rippled. She grasped the edge of it. “Toby?” She swept the curtain open.
A screech burst from her. She stumbled backward and collapsed on the bath mat, with a jarring thump to her rear end. “What on earth is that?”
A hunchbacked creature about two feet tall huddled in the tub. Brick-red, naked except for a ragged loincloth of the same color, it had a mop of stringy, black hair and elongated fingers and toes with nails like claws. It was licking the tile walls with a long, sinuous tongue like a frog’s. Its saucer-like, black eyes stared at her. With a stifled “eep!” it blinked out of existence.
Trembling, Val clutched the edge of the sink and hoisted herself upright. She scurried into the bedroom and dove under the covers like a child fleeing the boogeyman.
She lay there with her lids squeezed shut until her pulse slowed to normal. I did not see that. I did not. She opened her eyes and gazed into the darkness, softened only by the night light from the open bathroom door. “What is with these crazy dreams all of a sudden?”
“You are not dreaming.” The feminine voice sounded as if it came from somewhere in the middle of the room.
Val sat up with the sheet pulled to her neck. “Who’s there?” She switched on the bedside light.
A slender, white cat leaped onto the end of the bed. The animal had emerald-green eyes and wore a red scarf around her neck. “Greetings and profound thanks for your hospitality. I assure you this is not a dream.”
Val bent her knees to keep her feet out of the phantom feline’s reach. “Is too. I must be still asleep. If not, how did you get in the house?”
Demurely seated at the foot of the bed, the cat curled her tail around her paws. “I have always been here. I was bound to the magic of the scroll, and your blood released that magic.”