Choctaw Nation and Ireland Bonded by an Act of Kindness

How about some good news? How about a story about an act of kindness that has been remembered and celebrated for close to two-hundred years? This news is close to my heart…and my DNA.

One of my grandfathers was a redheaded, 100% Irishman. One of my
grandmothers was ¾ Indian of the Choctaw and Chickasaw tribes. They met, fell in love, and produced my mother. Recently, I discovered that the Choctaw Nation and Ireland have more in common than these two grandparents of mine.

In 1847, the Choctaw people were probably still feeling the emotional effects of having walked the Trail of Tears in 1831 and 1833. News reached the nation of the Great Potato Famine in Ireland. In March of that year, a group of Choctaw people met to raise money for the starving poor of Ireland. They managed to pool together $170 which they sent to the Memphis Irish Relief Committee who then sent it on to the General Irish Relief Committee of the City of New York. Today, $170 would be equal to $5,000.

The chairman of the New York committee specifically mentioned the Choctaw Nation’s gift in his reports. The gift was significant for those times.

The Irish people have never forgotten the kindness of the Choctaw people. In 1992, a group of Irish men and women walked the 600-mile Trail of Tears and raised $170,000 that went to the famine relief in Somalia. What a gesture of paying it forward. $170 gave the spirit to raise $170,000. 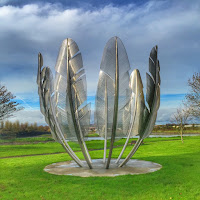 There’s a statue in County Cork, Ireland, commissioned in 2015, that is dedicated to the bond between the Choctaw Nation and Ireland. Last year, a scholarship program began for members of the Choctaw Nation to study in Ireland. When I learned of this, well, I got a bit teary. How very special for those students.

The connection between the people of Ireland and the Choctaw Nation proves how a simple act of kindness can bring nations together. A real lesson here in humanity.

It’s a top wish list item for me to visit Cork County. I bet my grandma and grandpa would be thrilled.