Please welcome Alice Renaud to Muse Monday. What a fun post about fantasy and our own beliefs.

With Easter only one week away, it got me thinking about religious festivals and their place in my writing. I am a Christian, and always look forward to Easter, even if the celebration will be muted this year. But like many of my favourite fantasy authors, I create characters who are… pagan. Robin Hobb, George R.R. Martin, even Terry Pratchett and Neil Gaiman… all their worlds are pagan worlds, peopled with gods and monsters. I wonder why that is. Perhaps we can blame Tolkien – the devout Catholic who was obsessed with Beowulf and the vanished universe of pagan Saxon England. Maybe it’s because fantasy is rooted in our collective past – and in Europe we were pagans for a long time before we became Christians. Many pagan customs and festivals have endured, under a different name, like the old winter feasts of Halloween and Christmas.

When I started to write my fantasy romance Sea of Love trilogy, it seemed natural that my shape shifting merfolk would have a mythology of their own. Their goddess, or guardian spirit if you prefer, is the Lady of the Sea, a supernatural watery being who watches over the merfolk… but also over humans who love the sea. The Lady plays an important part in the first two books in the series (which can be read independently), A Merman’s Choice and Music for aMerman. She is really an embodiment of the ocean and Mother Nature, in all her beauty and fierceness.

I don’t see a contradiction between being a Christian, being active in my church, and writing about a “pagan” world.  For me the pagan faith is about a deep love of nature, a burning desire to venerate and protect all living things. “The Divine comes in many forms, and I have many names. But only one love for all the children of the sea,” the Lady tells Alex, the heroine of A Merman’s Choice. The merfolk have a guardian spirit in their image… but the Divine spirit encompasses all living things.

So whatever your beliefs, I hope you are enjoying the spring… and that you will be celebrating in some form, whether it’s in church, in a garden, or simply eating chocolate eggs! Read more about Alex’s encounter with the Lady of the Sea in the excerpt below. 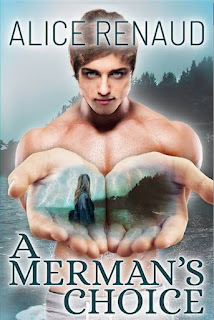 A Merman’s Choice, Book 1 in the Sea of Love series (books in the series can be read independently)

Blurb
For centuries the shape-shifting mermen of the Morvann Islands have lived incognito among humans. But one of them, Yann, has developed some bad habits. Like rescuing humans, even when doing so risks revealing his true nature. When he fishes Alex out of the sea, he doesn’t expect her to reappear eight months later, and turn his life upside down by asking him to be her guide.
Alex is determined to fulfil a promise to her dying grandmother, by gathering pictures and stories of the Morvanns. But she soon discovers that, on these remote Welsh islands, legends have a habit of becoming true!

Over the course of a few days, Yann and Alex grow close. But some mermen hate humans. Their hostility, and Yann’s secret, threaten to tear the couple apart just as they are discovering that they are soul mates. Can Yann overcome the obstacles in his path and make the right choice?

Excerpt
An odd, resigned calm enveloped Alex. She felt that she was detaching from her body as she sank into the depths, the same emerald colour as Yann’s eyes. She thought of him, his face, his laugh. If she had to die, she wanted to die with that image in her mind.

A feminine voice spoke in her head. You’re not going to die.

Alex’s chest was no longer hurting. She was underwater, yet she was breathing. I’m dreaming, she thought.

The voice answered. No, you are not. I am real. This is truly happening. The words echoed in Alex’s mind, soft but deep, and rich with all the sounds of the sea. She could hear a dolphin sing, somewhere near the surface, and she understood its language. She could hear fishes whispering, and the great thumping dance of the humpback whales, far away.

Arches rose before Alex, shining and transparent. The structure resembled a crystal palace under the waves. Out of the palace came a figure. A woman, as young and beautiful as the spring, as dazzling and majestic as the ocean. She wore a turquoise dress, and a silver crown on her sea-green hair. In her arms, she held a small, perfect, sleeping baby.

She glided towards Alex. You are safe.

To her amazement, Alex did feel safe. She was no longer drowning. Somehow, she knew that the apparition was not a hallucination, and that she spoke the truth. The legends were coming to life.

Who are you? she thought. Where am I?

The woman smiled. Light emanated from her, with a honeyed brilliance that rippled through the water, bathing Alex in a comforting glow. I am the Lady of the Sea, and you are in my kingdom, in the mermen’s world.