Writing fantasy romance is a challenge, creating worlds from literally the soil upward. But I can handle that. All it takes is imagination fused with relevant life experiences.

For instance, I’ve never lived as a cursed warrior in a land populated by beast-men, but I have experienced a high mountain meadow in spring, ridden horses, and learned about panning for gems from my father’s Alaskan experience. I’ve never fended off danger with swords, but I’ve travelled the UK, hefted swords to learn about balance, and explored tumble-down castles.

None of that, however, made writing these three characters from BLOODSTONE any less wickedly challenging.

#1: The Shadow Man
Mirianna and her father fell into place, but my hero, the Shadow Man, refused to tell me his real name. I wrote a third of the book before he reluctantly revealed it. That resistance was clue to his character. Being an ‘into-the-mist’ writer, I had to keep writing to discover the truth.

The Shadow Man wants to be left alone. But beneath this stated goal is a deeper need: he’s lonely. When the opportunity comes to relieve his loneliness with a blind boy servant, he impulsively acts against his stated goal. Conflict ensues. His neatly ordered life, miserable as it has been, falls apart despite repeated attempts to maintain his solitude. What he thinks he wants and what he needs are at odds, and that’s just his internal conflict.

Add a woman so determined to protect her aging father she embarks on a dangerous journey, an old enemy seeking power, and a—possibly—magical lion shadowing his every step, and my hero has more than enough conflict. By first draft’s end, he had dug up and faced every ugly truth preventing him from being the man he ought to be, the man he’d chosen to bury (that real name).

#2: The lion
I’ve never lived with a mountain lion, but I’ve lived with cats. However, even I didn’t know when I started writing who or what this lion would be. (Remember that seat-of-the-pants thing?) She appeared with various characters at critical moments, and I had to let her gradually reveal how she was connected. Additional challenge: she has no point of view, so I couldn’t get into her head like I could my hero. (He was just stubborn; she was downright enigmatic.) So, write a mountain lion-like cat into a fantasy when you have no idea why she’s there, except she was in the very first scene from which this book sprang, and you have the idea of this wicked challenge.

#3: Gareth
I’ve worn corrective lenses since childhood, but I’m in no way as severely visually limited as Gareth. Thinking of sensations, sounds, and smells as his primary means of interpreting the world forced me to expand my means of description. I also had to remember he was 13, not an adult. Writing him was a definite challenge, but also wickedly satisfying.

Conclusion: Don’t be afraid to write what you don’t know. Fuse a bit of imagination with a fragment of authentic experience and even the seemingly impossible can become satisfying and convincing fiction…if you’re up to the challenge.

Author Bio:
Helen C. Johannes writes award-winning fantasy romance inspired by the fairy tales she grew up reading and the amazing historical places she’s visited in England, Ireland, Scotland and Germany. She writes tales of adventure and romance in fully realized worlds sprung from pure imagination and a lifelong interest in history, culture, and literature. Warriors on horseback, women who refuse to sit idly at home, and passion that cannot be denied or outrun—that’s what readers will find in her books. 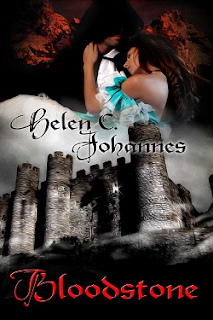 BLOODSTONE, Launching a Star Winner in Fantasy Romance, from The Wild Rose Press.

What if looking at the face of the man you loved meant death?

Years ago, warrior Durren Drakkonwehr was cursed by a mage. Now feared and reviled as the Shadow Man, he keeps to himself, only going to town to trade rare bloodstones—petrified dragon’s blood—for supplies. Though he hides his face, he can’t hide his heart from the woman who haunts his dreams…

Needing bloodstones for a jewelry commission, Mirianna and her father journey across the dreaded Wehrland where the beast-men roam. When their party is attacked, only the Shadow Man can save them. Strangely drawn to him, Mirianna offers herself in return for her father’s rescue.

Living in the ruined fortress with the Shadow Man, Mirianna slowly realizes that a flesh-and-blood man, not a fiend hides there in hoods and darkness. But are love and courage enough to lift the curse and restore the man?