I'm so excited about this new book by up and coming author, Kelly Hopkins. You'll want to say you read her first book when she takes off, and then await her future releases. 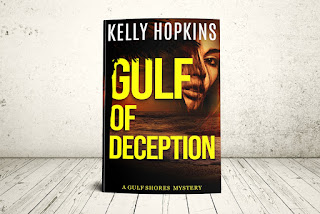 Gulf of Deception is the first in a series. This book is categorized as Young Adult, but this all-grown-up lady thinks you'll find a great read no matter what age you're classified. She puts you on that beach, in that beach town. Her setting is a character all to itself. The suspense is gripping, and the story is complicated so you can't put it down. I highly recommend this book.

On the cusp of her high school graduation, Lily Harmony needs to figure out how to break it to her lawyer parents that she doesn’t want to follow in the family footsteps--especially with her band in high demand on the Fort Myers beach scene.

But when her father is killed inside his office and their mother accused of his murder, Lily and her estranged sister Annabelle are convinced the police have the wrong person. Clues are hard to come by until a mysterious man hands Lily a flash drive and warns her the information contained on it might get her killed. As Lily works to unravel what the files and pictures mean, a stunning discovery reveals the murderer might be closer than she thought.

With the help of her gamer BFF and maybe something more, Lily and her sister scour the Everglades for connections to her father’s killer. But what they find hidden in the canopy of cypress tress is more dangerous than they ever imagined—a long-lost secret worth millions—and worth killing for. 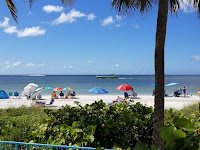 Sunlight streamed through the windows, and pang thudded deep in my chest. Hard to believe I was
leaving this stunning scene in a few short months for college. A thousand miles north in Boston, away from the sun, the sand, and the balmy breeze. At least the ocean was nearby— except it would be the lumbering, lead-colored, frigid Atlantic, and I’d be wearing an unflattering parka with boots up to my knees. Maybe when the snow melted in June, I could trick myself into believing I was standing on the Gulf.

All so I could one day add my name to the Harmony Law letterhead. Except that was the last thing I wanted.

My feet stopped short as a shock reverberated through the walls, like something heavy crashed down in another part of the building. But there were no other offices on the top floor. I pulled my headphones from my ears and turned off the music.

At the office door, I peered into the hall. A gust of humid air rushed down the narrow passage and ruffled my hair. Now where had the breeze come from?

should have vocals. Another blast of breeze hit me as if someone had forgotten to shut a window.

“Mom?” I called. The law office answered me with soft strains of piano wafting down the hall.

“Dad?” My father’s door stood ajar at the far end of the building. Next to it, my mother’s office door was shut. Maybe they were both in Dad’s office. His was the only one with a balcony. They could have gone outside and left the door open.

Another violent crash came from the direction of his office. A gunshot rang out. Then another. Followed by a blood-curdling scream.

Terrified, I crept down the hallway, my back pressed against the wall, my cellphone pulled from my pocket and clutched in my shaking hand. My heart pounded, making me faint. I blinked away the sensation. Sharp blasts of unintelligible conversation drew me toward the office as wind whipped down the corridor.

I hesitated at the door and gasped.

Mom knelt beside Dad, a gun in her hand. Blood colored the front of his polo shirt—a crimson stain spreading from his chest and down his left side on a backdrop of stormy blue fabric. Strangled sobs ripped from my lips. I rushed in, dropped to the floor beside my father, and took his limp hand.

Glass shards bit into my knees as a terrible gurgle erupted from his throat. Bloody froth colored his chin and lips. The room spun around me.

Kelly Ann Hopkins is the author of Gulf of Deception (Gulf Shores Mysteries), High Vices (July 2021), and Buried Beneath (August 2021). She spends her days as a high school librarian and creative writing teacher where she challenges her students to read with abandon. When she’s not creating perilous adventures for her characters, she is dreaming of her next trip to the Florida Gulf Coast.

Kelly lives in Pennsylvania with her husband, two children, and too many books.