I'm so happy to have the amazing author, Kayelle Allen on Discover... today. She has a great tale of fearlessness. Enjoy!

In 1975 I was 24 years old and fearless. Which is why I made a trip to Europe without buying an airline ticket, with only $400 in my pocket. 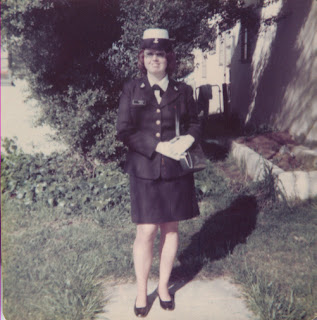 I was active duty military back then (Navy) and so was my husband. He was stationed on the John F Kennedy, doing a cruise in the Mediterranean while I was stationed in San Diego. Each was completely half-way around the world from the other.

We'd only been married since December of 1973, and it was now October 1975. He'd left on the cruise the day before Valentine's Day. (Thank you, Uncle Sam.) So when I had the chance to take 30 days of leave and go visit him, I jumped into action.

If you're active duty, you can hop onto a military flight at no cost, as long as there's an empty seat. I paid for a flight from San Diego to Pennsylvania, got a shuttle bus to the Air Force base there, and put my name in for a flight. I was a lower priority than someone reporting for duty, but if there was an open seat, I was in.

A retired couple who'd been there for weeks trying to get a flight told me it might take a long time. I was higher priority than they were, so I had a chance. But I convinced them that I was getting on a plane that very night, and for them to check out of their hotel and stay in the airport with me. One of those gut feeling decisions that you make with no reason. I am intuitive, and I had a good feeling about it.

About 3:30 in the morning, an unexpected flight came in that was heading to Germany non-stop. I wanted to go to Naples, Italy, but Germany was a lot closer, so I said I'd go. The other couple came with me. The plane took off a little after 4:00 with empty seats. The three of us had been the only people in the airport.

Once I arrived, I met an active duty couple who were flying to Aviano, quite a long way north of Naples, but still in Italy. I got on that flight with no trouble. The couple invited me to stay overnight at their place because there were no flights scheduled for 2 days. I joined them for an evening out with friends and ate the best pizza of my entire life. I hadn't slept well in a few days, so once I stretched out and closed my eyes, I was gone.

When the next flight was scheduled, they drove me to the base, and I thanked them and checked in. I was on a flight within an hour or so. This one went straight into Naples.

An American guy who was living in Naples said he'd show me the hotel if I'd pay the taxi fare for both of us, which I did. Had a wild ride through the city. He told me that the people in Naples start their car and blow their horns. It was noisy enough that I had no trouble believing that.

Next day, I got a ride to the Navy base where the liberty launch (a smaller ship) was bringing people in for leave. I was beside myself when I saw my husband. We had quite the unforgettable reunion, believe me.

This was all back before the internet or cell phones. One call home from Italy cost us $99 because we talked so long. We didn't have text messaging. We had to communicate where we'd be and when by mail, days ahead.

Looking back, it was a gutsy thing to do. I wouldn't dream of it now. But back then, I was young, in love, and fearless.

Check out one of Kayelle's books: 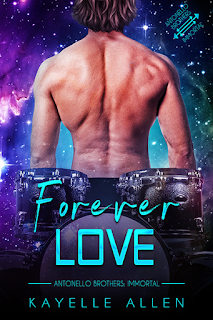 Luc is the most powerful man in an intergalactic empire of 22 planets—but he's alone, life after life.

Izzorah survives by hiding both his illegal status and his blindness for fear of banishment.

Luc might risk violating the highest law among the immortals by sharing his blood, but it means revealing the truth of what he is, and that means baring every damning secret, every twisted truth, and twelve thousand years' worth of dirty hidden lies.

With no guarantee their love can survive that kind of truth... 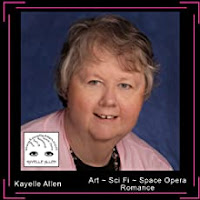 Kayelle Allen writes Sci Fi with misbehaving robots, mythic heroes, role-playing immortal gamers, and warriors who purr. She is the author of multiple books, novellas, and short stories. She's also a US Navy veteran and has been married so long she's tenured.
Sign up for her newsletter and get free Sci-Fi stories, book recommendations, and become a Tarthian Empire citizen (and an immortal), among other reader exclusives. https://kayelleallen.com/immortality
Twitter http://twitter.com/kayelleallen
Instagram https://instagram.com/kayelleallen
Kayelle's Keepers http://facebook.com/groups/KayellesKeepers
Bookbub https://www.bookbub.com/authors/kayelle-allen
Goodreads https://www.goodreads.com/author/show/710889.Kayelle_Allen
Amazon https://www.amazon.com/Kayelle-Allen/e/B003ZRXVN8
Posted by Brenda Whiteside at 12:30 AM