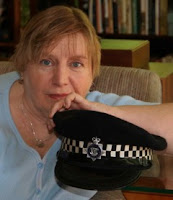 The St Louis Scottish Highland Games were in full swing. We were housed in a field, which gave plenty of legroom for caber tossing, hammer throwing, and sheep dog herding—space-demanding activities that pesky, shade-providing trees could hamper. But the uncluttered area left the massed pipe band marchers and us sellers with no shade and baking under the summer sun. Our vendors’ tents provided cover, certainly, but they also seemed to act as traps for the heat. Forget the fried-egg-on-the-sidewalk test; I swore I could bake shortbread on the ground in my tent. But I was there to sell books, not cook, and The Games were a good venue for my British protagonist with Scottish roots. And although Michael McLaren had hitherto sleuthed exclusively in England, my current mystery, An Unfolding Trap, was based entirely in Scotland. I had high hopes it’d sell well.

I’d just finished guzzling my third thermos of iced tea and discreetly flapped the hem of my tartan skirt for air circular when a man with a cigarette jammed into his mouth came up to the book display. I smiled at him; he evidently was interested in looking at McLaren’s newest adventure. But the man had his dog with him, and held the lead in his left hand. He looked like he wanted to pick up a book and thumb through it, but he didn’t want ash drifting from the cigarette and coating my book. So he removed the cigarette, crammed it into his pocket, and patted his dog as he told it to sit. He then proceeded to leaf through the novel. It didn't take long before I noticed smoke coming from his pocket and the fabric turning a dark brown color. I hinted, "Sir, I think your pocket's on fire." He glanced at me, then at his pocket, then uttered something I’m probably glad I couldn’t distinguish. He spat on his fingers and dabbed at the inferno. I handed him my bottle of water so he could take care of the inconvenience. He did and safely continued his browsing.

He bought An Unfolding Trap. If it was in gratitude for my firefighting expertise or his interest in McLaren, I'll never know. 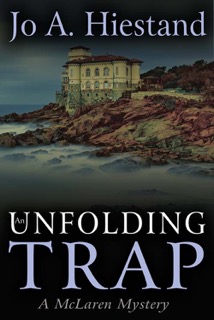 Ross leaned forward, closing the distance between them. “You’re sure you didn’t get angry when you found Lanny this afternoon?”

“Of course I got angry!  Who the hell wouldn’t? The bloody git killed a man, frightened a dozen others who were there, kidnapped Miss Skene, held her hostage--”  McLaren took a deep breath. “But I didn’t kill him. I tied him up so he wouldn’t escape, then phoned you when I could.”

“An hour later.” The voice was flat, unimpressed.

“Yes. An hour later. Maybe ninety minutes. I didn’t write down the time, but I phoned here, in the village.”

“Why wait so long to ring us?”

“Pardon?” The suspicion that things were turning horribly wrong whispered to McLaren.

“Why didn’t you phone right then? Did you want to put some space between you and the killing so you could establish an alibi?”

Since his infancy, Michael McLaren has been the target of his paternal grandfather’s anger. So when the patriarch sends an invitation to heal the rift, McLaren travels to Scotland, eager to meet and finally end the feud.

But the welcome never happens. In fact, the older man is furious McLaren’s appeared on the family home doorstep, convinced it’s some trick.  McLaren, however, is confused. If grandfather hadn’t sent for him, who had?  And why?

In Edinburgh, a man standing beside McLaren in a bus queue is killed in a hit-and-run accident. But McLaren wonders if the driver got the wrong person. And after an attack leaves him for dead on a wintry moor, McLaren’s convinced someone from his past is trying to murder him.

As McLaren trails the hit-and-run driver from the medieval ‘underground city’ of Edinburgh to the Boar’s Rock--the MacLaren Clan’s ancestral meeting place--the assaults intensify, and he’s plunged into a very personal hunt for a World War II treasure. The puzzle is fascinating; he just has to stay alive to solve it.

Posted by Brenda Whiteside at 6:56 AM