I'm an author, but I'm also a reader. Each month, I'll share with you reviews of present and past reads. My available time to read is limited because I write, but I love to curl up with a paperback or an eBook at night for the last hour of my day.

Here are some of the books I've read recently or in the not-too-distant past. Maybe you'll discover a new book or author. 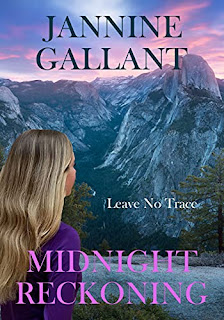 If the Yosemite backpacking trip doesn’t kill them . . . someone they trust just might.

Reuniting members of their college hiking club, Leave No Trace, in Yosemite National Park to raise money for a wildlife charity seems like a terrific idea to Raine Endicott. She needs time away from her dead-end job in San Francisco to reassess her future, escape from the city, and enjoy nature’s splendor. Connecting with old friends is a bonus . . . especially Levi Hill, the man she turned down all those years ago. A decision she lived to regret.

For Levi, seeing Raine again is like flipping a switch. His crush on the woman who got away quickly intensifies into something far more meaningful. But it isn’t easy to focus on romance and the challenges of a budding relationship when one of their own is murdered—and the betrayer is hiding among them in plain sight. Leaving the park only adds a new level of terror as the danger escalates. Because Raine poses a threat that must be eliminated . . . even if that means killing again.

Ms. Gallant’s latest romantic suspense is entertaining on several levels. The setting is an adventure. I’ve been to Yosemite years ago, and reading this book was like a return trip. Her cast of characters (always my favorite part of any book) are varied and well defined. Who’s the villain? I couldn’t guess and that made it a page turner. You’ll enjoy this thriller for sure. 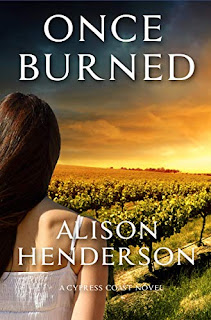 Once Burned by Alison Henderson

After a long string of dating disasters, Sage McDowell has reason to be leery of men. She prefers to spend her time managing an organic farm in idyllic Carmel Valley, California, and making raku pottery for the gallery she owns with her sisters. But when two men from her past resurface, her well-ordered life turns upside down.

Adam Wingate, her “almost” prom date, returns to the valley to take over the helm of his family’s vineyard and winery. And Spencer Silveira, her high school tormentor, persistently tries to push her beloved elderly employer into a shady real estate deal.

When Spencer is found murdered, Sage and Adam must join forces to unravel a tangled web of events before becoming the killer’s next victims, all while navigating the growing attraction between them. Their quest is sometimes threatened, sometimes aided, by a sinister drug cartel, a mysterious restauranteur, and a pair of high-flying turkeys named Wilbur and Orville. Welcome to mayhem in paradise.

This is the second in the series, but if you haven't read the first don't worry about it. I love that these books are about sisters with a mom thrown in who runs an organic veggie restaurant. This book is very California. Ms. Henderson paints the setting beautifully with much of the action taking place on or around a vineyard. I routed for Sage and Adam to get together and for Spencer to get what he had coming to him. In the end, it’s a surprise. You’ll be thoroughly entertained.

Posted by Brenda Whiteside at 11:30 AM