Slip of the Tongue by Jo Hiestand

Fearless and funny sums up today's post by guest Jo Hiestand. A Fearless trek up many steps, and it ends with a funny conclusion.

You can never be too careful about your word choices when traveling abroad. 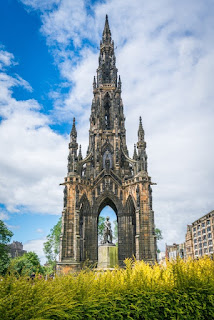 My friends and I were in Edinburgh, Scotland, and had climbed to the top of the Sir Walter Scott monument. It’s a huge Victorian Gothic-style edifice, two hundred feet tall that shelters a statue of Scott, rather like a four-legged hen hovering over her egg.

There are other monuments to people all over the world, of course, but the thing I really like about the Scott Monument is that you can wend your way nearly up to the top of the structure. This is accomplished by staggering up two hundred eighty-seven steps via a spiral staircase in the monument’s core. I think I counted them at the beginning, but soon stopped due to needing to focus on trying to breathe.

Breathing problem aside…you don’t have to trudge up the entire thing in one go. There are numerous viewing platforms at various levels, branching out from the corkscrewing climb. No matter which platform you stop at to gasp for air and subdue your burgeoning vertigo, you get a magnificent view of the city.

In addition to the Victorian chiseled stone curlicues and such adorning the monument, it’s also covered in sixty-eight statues: various Scottish writers, historical people, fictional characters and animals. I didn’t see them all, but they are there if you want to check them off your list.

Anyway, back to the excitement of my adventure… We climbed to the top, which was no mean feat, because the staircase is very narrow. Every time we met someone coming down the steps, we literally pressed our backs against the wall, flattening ourselves as best we could to increase passing space. I figured this could be how bats feel when clinging to such walls.

Back on the ground, I wanted to get some photos of the whimsical stone gargoyles that decorate the monument’s exterior.  To get some close-up shots, I had to change the lens in my camera to a telephoto lens. So, I sat on a bench near the monument and switched lenses.  The area evidently was popular and seemed to be a great place for older folks to sit and talk, perhaps feed the pigeons, and wait for the buses.  My friends were anxious to go to the Castle, situated at the upper end of the Royal Mile, and nagged me to hurry up, take the photos, and come on.  I got up from the bench and turned toward the Monument. This, unfortunately, placed the older adults in front of me. Without thinking, I said, “I just want to take a photo of these old gargoyles.”  I’m probably the first St Louisan who’s been cussed out in Gaelic.

I mention the incident in my US-based amateur sleuth cozy mystery novel Shortbread And Dead, when a town resident talks about a song he’s writing.

Shortbread And Dead: A Cookies And Kilts Cozy Mystery 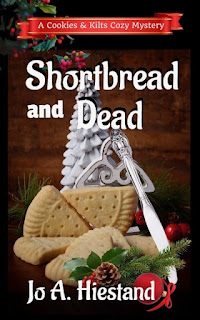 It’s two weeks before Christmas. In the small Missouri town of Beaudin Trace, the holiday spirit is revving up: shops are adorned in seasonal decorations and the annual Winter Scavenger Hunt is in full swing. This year, the grand prize for the hunt winner is provided by The Cookie Cutter, a bakery owned by 40-year-old widow Kate Dunbar. It’s her first time to supply the prize since moving to the town several years ago. And she’s thrilled to give Pam, the winner, something Pam loves: a huge basket filled with muffins, scones, jams and hot chocolate mix…and shortbread.

But the thrill doesn’t last long, for an hour later Pam’s found dead outside the bakery—conveniently close to Kate and her employees.

Despite pleas and stern warnings from her friend, Deputy Sheriff Josh Cline, Kate decides to investigate, needing to discover who murdered such a beloved resident, and taking the heat off her and her staff before her business crumbles.

Complicating her inquiry is the string of cookie cutter-style art gallery burglaries in surrounding towns. Are they linked to Pam’s murder? Perhaps Harold—the affable retiree who writes outlandish songs such as “Penguins, Arise!”—has something to do with both incidents: it wouldn’t be the first time beautiful icing has disguised a burnt cookie.

As Kate hunts for the killer, she uncovers secrets that reveal the killer’s identity. The trouble is, that revelation may turn her into victim #2.

AMAZON BUY LINK
FIND ALL OF JO'S BOOKS HERE
Posted by Brenda Whiteside at 12:30 AM