Fearless on a Bike by Terry Segan #FearlessFriday #Paranormal 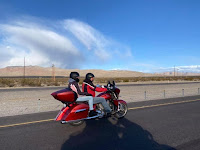 Now this is a Fearless Friday post I can identify with. Years ago, when my husband got a big bike...and this was in the day of kick starters...I wanted badly to drive it. He said I could if I could get it started. Ha! No matter how high and jumped and stomped on that starter, it wouldn't happen. So, you go, Terry! And not to be forgotten, her book, Precious Treasure, sounds intriguing. It's on my list.

At the age of 22 I left the suburbs of Long Island and struck out for Los Angeles. I’d gone there on vacation six months prior and decided that was the place for me. Within a week of arrival, I’d landed a job on the Paramount Studios lot. Alas, it was a secretarial gig in an obscure financial department—but I was on the lot!

I’ve always embraced change and crave new experiences. So, at the age of 51, I found myself happily divorced and ready to choose my mid-life crisis. I wanted to ride on a motorcycle. A friend of a friend volunteered and after only one ride I was hooked. Fast-forward a year later and the deal-breaker, when I met my current husband online, was I had to be comfortable on a motorcycle—either my own or the back of his. Our first date was on his Harley, and we’ve been together for seven years.

People have asked if I ever wanted to ride my own. It took me a couple years to get there, but four years ago I braved the weekend course at the local college. We rode cute little 250 CC’s to learn and test on. Having long legs my knees were up to my ears!

On the third day we tested. I immediately messaged my boyfriend (now hubby) saying I failed. My hero assured me he’d get something for me to practice on, and I could take the class again. After mentioning I’d dropped the bike twice during practice, he revised that to say we’d find a little beater bike. The instructors gave us the results after lunch. To my absolute amazement I passed! While I blew through the quick stop, I could make a U-turn and weave through cones. Guess I’m good at confusion and misplaced directions. 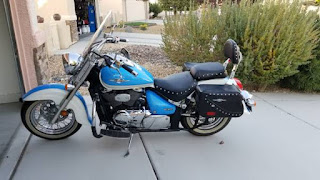 Six months later we acquired Sandy, a cerulean blue and white Suzuki Boulevard. At 800 CC’s she was a smidge more powerful than what I learned on.

My nemesis became the clutch—a slim piece of demonic metal that determined whether my bike was worthy of moving forward or stopping without stalling. I’d never driven anything with a manual shift. It was embarrassing enough learning to drive in a green Gremlin as a teenager.

We practiced riding early on Saturday and Sunday mornings through the roads of an RV resort. There I’d be in full gear tooling along, with my tutor following behind dressed in flip flops, a tank top, and no helmet on his Victory. Trying to settle into the clutch, I managed to lurch to a halt and tip over. Sandy was equipped with engine guards, but not handle guards. There’s no way I was stopping five hundred pounds of bike from going over. And it did. Twice.

The first time I snapped the clutch handle, I was frustrated. The second time, I believe my exact words were, “Let’s sell the darn thing!” (I’m sure there were expletives involved as well.) I think the stubby piece of metal gave me an evil leer as it did a victory dance. My boyfriend ordered a replacement both times. The second time I suggested practicing with the broken handle before investing in more. He wouldn’t hear of it—then told me he had ordered three. While not exactly a vote of confidence, I can appreciate the humor (and reduced lag until practice time).

In the end, I had to admit defeat as I never got comfortable using a clutch. But I’ll always have the ‘M’ endorsement on my driver’s license. Let’s hope I never have to take over on the husband’s motorcycle, as it weighs in at 1,000 pounds. Not getting that puppy off the kickstand!

Meanwhile, I’m happy to be a backseat rider. From there I can travel for miles as my mind wanders creating plot lines and chapters for my next book.

Eight years ago her husband disappeared. Does a hundred and fifty-year-old journal hold the answer as to why? 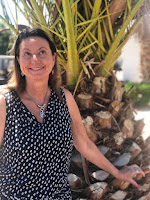 Terry Segan resides in Nevada. The beach is her happy place, but any opportunity to travel soothes her gypsy soul. The stories conjured by her imagination while riding backseat on her husband’s motorcycle can be found throughout the pages of her paranormal mysteries.