I'm an author, but I'm also a reader. Each month, I'll share with you reviews of present and past reads. My available time to read is limited because I write, but I love to curl up with a paperback or an eBook at night for the last hour of my day.

I tend to read what I write, but not exclusively. Besides Romantic Suspense and Mystery Romance, I read crime and law novels, once in a while a true story, WWII historicals, mysteries, and mainstream character driven books.

Here are some of the books I've read recently or in the not-too-distant past. Maybe you'll discover a new book or author. 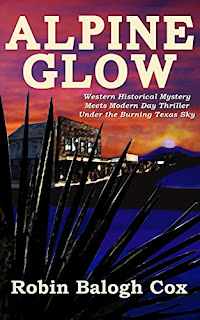 Two tales. One location. Mystery and suspense with a twist.

Every place in the American West has a story. Shadows of the men and women who fought to survive the deadly challenges of the Old West remain, some inspiring, some dark, all of them waiting to be discovered.

The Old West Suspense series follows the adventures of journalist, Beverly Conners, as she hunts down modern day stories in small town America while also telling the lost tales of the people who lived and died in that same town long ago.

Alpine Glow is a parallel tale masterfully woven between a passionate western mystery and a modern day thriller, both taking place in the same desert town of Alpine, Texas...over 100 years apart.

It took me a couple of chapters to get into this story, but I did. This book is really two stories told simultaneously in present day and the old west past. I have to say, I was far more vested in the old west tale. The present-day romance was a little forced to me, the suspense not quite suspenseful. But overall Ms. March made the book work. If I gave stars, it wouldn’t be a 5-star read, but I was entertained…which is all I ask for in a read. 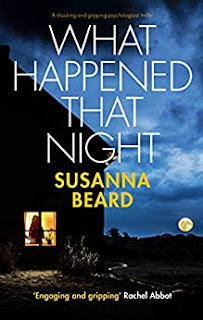 What Happened That Night by Susanna Beard

THAT NIGHT.
Lisa remembers the first part of the night: an evening in the pub with her best friend.
Then nothing.
She wakes up, days later. She’s in hospital. Her best friend is dead.

WHAT HAPPENED?
Lisa holes up in a remote country cottage, plagued by guilt and flashbacks: how did their assailant know them? Why were they attacked? And what really happened that night?

With only vague memories of the event, she cuts herself off from friends and family, spending her days wandering the hills with her dog, Riley.

Lisa realises there's another truth still hidden to her, a truth she can't escape from. A truth that may have been right in front of her all along.

Discover this shocking and absolutely gripping psychological thriller that delves into jealousy and suspicion by critically acclaimed author Susanna Beard.

Honestly, I don’t know how to review this book. I didn’t want to finish it. I was often irritated by the protagonist. I was often irritated by the tease. But I HAD to know whodunnit. The author writes a smooth book. So maybe the author did her job? If I really don’t like a book, I won't read to the end. But I did because I had to know. I would suggest you read the sample on Amazon and make your own decision as to whether to start it or not.

Posted by Brenda Whiteside at 4:26 PM