IN YOUR OWN BACK YARD by Deborah C. Wilding


MUSE MONDAY
Brenda, thank you for inviting me to Muse Monday. As a long-time reader of historical fiction, I enjoy watching history unfold through characters that become as real to me as though I knew them personally. I've found that almost any period provides a rich colorful background  for characters that live and walk through the pages of times past.  And sometimes the inspiration for a story can come from very close to home, when you least expect it. 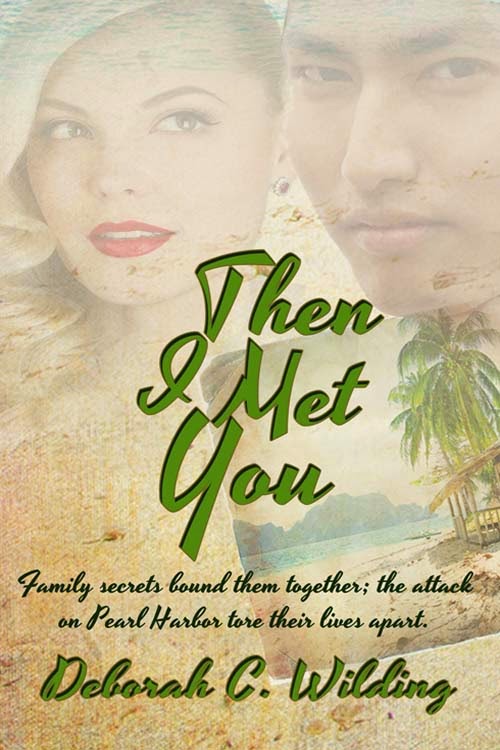 That was the case with the setting for my new release--"Then I Met You." The glimmer of an idea was first sparked when I found an old map that identified a wooden building near my neighborhood in Hawaii as a former internment center for Japanese during WWII. I've passed the building a dozens of times without having a clue. In that moment it struck me that the makings of an historical romance can begin right in your own backyard. And I wondered, what would it have been like, in the days surrounding the attack on Pearl Harbor, if two people were falling in love--and one of them was Japanese.

I began to do some research. What was Honolulu like in 1941? What happened to ordinary people on December 7th? My characters and their lives began to take shape. Though the main characters are fictional, the period in Hawaii's history is very real and affects their lives in meaningful ways. Conflicts, dilemmas, mystery, heroism and romance are woven together with actual events and historical figures--the theft of crown jewels really happened, and only a few diamonds have been recovered to the present day. But in the end, the book is an impossibly courageous love story.

To keep the threads of my story from getting tangled, I taped a gigantic home-made calendar on my wall with the dates running from early November to mid-December 1941. In ink I penned actual events that happened on each day; on post-its I wrote each character's activities and emotional reactions. At first, the post-its had to be shuffled around like crazy between the dates before I got them settled into a comfortable pattern. I was concerned that too much organization would stifle my characters, but they often managed to surprise the heck out of me!  And instead of worrying about where the plot was going, I could focus on my real loves: dialog and setting.

So, inspiration, research, organization.  Those were the first steps. In my story, prejudice, deception, and the devastation of war must be overcome. To find out how it all worked out you'll have to read "Then I Met You."

Connect with Deborah here:
http://www.deborahwildingauthor.com/
Posted by Brenda Whiteside at 3:00 AM

Email ThisBlogThis!Share to TwitterShare to FacebookShare to Pinterest
Labels: Deborah C. Wilding, Discover Yourself, historical romance, Muse Monday, Then I Met You