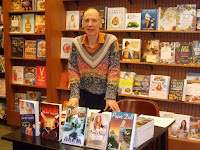 
Jana: I’m thrilled to be out of Joe Cosentino’s head and talking with you again.


Of course we all remember you as a child star in cherished films like The Adorable Orphan, Jungle Girl, and Pink Ballerina, but since you last talked with us you’ve had a huge comeback starring in the steamy His Obsession and the political thriller Madame Senator for which you won a well-deserved Oscar. You’ve had quite a comeback, personally and professionally.
Jana: And thanks to Joe Cosentino’s novels, my life is an open book. Five of them actually.


Jana, you are gorgeous at forty-one with your petite figure, layered blonde hair, crystal blue eyes, and porcelain skin. Do you have a beauty regime?


And since you live in the 1984, I love your chic business suits and dresses, shoulder pads, lace gloves, leggings, and scrunchies.


Jana: As they say, the clothes make the woman.


In your case, I think the woman makes the woman. You are truly fearless, Jana Lane. Please tell the readers about your mystery series by Joe Cosentino.

Jana: In PAPER DOLL I am thirty-eight and living with my family in our mansion in picturesque Hudson Valley, New York. My flashbacks from the past become murder attempts in my future. When the local police detective is of no help, it’s up to me to venture back to Hollywood, where I uncover a web of secrets about everyone I love. I also embarks on a romance with the devilishly handsome son of my old producer, Rocco Cavoto. After my investigation, I figure out the identity of the murderer, trap the rat on my property, and the truth comes out.


And in PORCELAIN DOLL (The Wild Rose Press), you make a comeback film and uncover who is being murdered on the set and why. And your heart is set aflutter by your incredibly gorgeous co-star, America’s heartthrob Jason Apollo. And as in PAPER DOLL, you use the skills you learned as a child star, including some karate moves, to trap the murderer. Well done, fearless Jana Lane!


Jana: A girl’s gotta do what a girl’s gotta do. Then in SATIN DOLL (The Wild Rose Press), my family and I head to Washington, DC, where I play a US senator in a new film, and become embroiled in a murder and corruption at the senate chamber. I also embarks on a romantic flirtation with Chris Bruno, the muscular detective. I also rub elbows with senators on both sides of the aisle, a lobbyist, and a Washington reporter.


Once again you figure out whodunit and corner the murderer into confession. Tell us about your current release, CHINA DOLL.


Jana: My agent arranges for me to star in a Broadway play. So in CHINA DOLL (The Wild Rose Press), I head to New York City to star in a Broadway mystery, where my I become enchanted by my gorgeous co-star Peter Stevens—another actor, and I’m faced with murder on stage and off. It is old home week and nepotism in action as the play is produced and written by the same producer (Stanley Rothman) and author (Katrina Wright) who produced and wrote my first Broadway play when I was five years old, Sweet Nothings! My co-star from Sweet Nothings, the aging but still gorgeous and mysterious Savannah Stevens, is co-starring in China Doll, along with Savannah’s incredibly handsome and muscular son, Peter Stevens, in his Broadway debut. Rounding out the cast are Rothman’s granddaughter Bella, my nephew Brad, and my youngest son B.J. And the play is directed by Katrina’s new husband.


Jana: Also in the cast are Sally Chen a recent Tony Award winning actress, and Tate Moonglow a transplant from Off-Broadway. Art imitates life as members of the production team of China Doll are murdered, and personal secrets are revealed.


I’m guessing once again Jana Lane uses the skills you learned as a child star to solve the crime and catch the killer.


Jana: Including a fight scene that takes place on stage!


You are truly fearless, Jana Lane! With her gorgeous violet eyes, is Savannah Stevens, the aging movie star, based on Elizabeth Taylor?


Jana: Savannah is a smart, strong, talented woman like Elizabeth Taylor, however, she doesn’t have anywhere near as many husbands or such a troubled life. What great fun for me to co-star with Savannah in a play when I was five years old then again at forty-one.


Is Katrina Wright, the highly successful mystery writer, supposed to be Agatha Christie?


Jana: They are both very successful, older female writers, but Agatha Christie wrote many novels and a few plays, Katrina has written many many plays and no novels.  Also unlike Agatha Christie, Katrina has a young stud husband who just happens to get the job as director of Katrina’s play—to the producer’s (Stanley Rothman’s) chagrin.


And you go through a major personal event.


Jana: I love that part of the story. It still brings tears to my eyes when I read it.


Everyone in CHINA DOLL seems to have a secret. Thank you for revealing them by the book’s end.


Jana: Thank Joe for that. Each Jana Lane mystery is its own story. Readers get a complete mystery with each novel, as you said, full of revealed secrets, clues, plot twists and turns, and white knuckle shocking ending.


Do you see the Jana Lane mysteries as a TV show?


Jana: Joe sure does. He wants to play my agent Simon!


What is your next mystery?


Jana: RAG DOLL, where I am offered the leading role in a TV pilot about an amateur sleuth. Life imitates art once again as murder and romance ensue. After all, it’s a Jana Lane mystery!


Jana: Via Joe. He loves hearing from readers. It gives him a break from listening to me. They can contact him at: http://www.JoeCosentino.weebly.com.
Thank you fearless Jana Lane from the Jana Lane mysteries, here with your latest release CHINA DOLL by Joe Cosentino, published by The Wild Rose Press. Stay fearless!


published by The Wild Rose Press


Jana Lane is back on Broadway in 1984—starring in a murder mystery. Life imitates art when members of the company are murdered. As Jana investigates, it’s clear she may be the next victim. Complicating matters is Jana’s uncontrollable infatuation with her leading man, gorgeous and muscular Off-Broadway actor Peter Stevens. Will Jana find the murderer before the curtain comes down on her?
Praise for SATIN DOLL, the previous Jana Lane mystery:
“A book that will captivate any reader! A page turner that won't let you go! This is one author you can always depend on to publish a good read!!” Stormy Nights Reviewing
“Joe Cosentino is a brilliant mastermind when creating the perfect mystery series. In each novel in this intriguing series of his, Jana Lane Mysteries, readers are blown away by his writing. The instant readers jump into Joe Cosentino's fictional world, the danger feels real, the suspense is killing, and the plot moves so fast. Action, lights, camera!”  “A fast-paced murder mystery that readers will easily fall in love with...and one they can't live without. Overall, I highly recommend this new title in the Jana Lane Mysteries and look forward to the next best adventure from Joe Cosentino.” Danielle Urban, Universal Creativity Inc.
Bestselling author Joe Cosentino won Divine Magazine’s awards for best mystery novel, best humorous novel, and best contemporary novel of 2015. He is the author of the Jana Lane mysteries: Paper Doll, Porcelain Doll, Satin Doll, and China Doll and the upcoming Rag Doll (The Wild Rose Press); the Nicky and Noah mysteries: Drama Queen, Drama Muscle, and the upcoming Drama Cruise (Lethe Press); the Cozzi Cove beach series: Cozzi Cove: Bouncing Back and Cozzi Cove: Moving Forward (NineStar Press); and the romance novellas: In My Heart anthology (An Infatuation & A Shooting Star), A Home for the Holidays, and The Naked Prince and Other Tales from Fairyland (Dreamspinner Press); and The Nutcracker and the Mouse King (Eldridge Plays and Musicals). As an actor, he has appeared in principal roles in film, television, and theatre opposite stars such as Bruce Willis, Rosie O’Donnell, Nathan Lane, Holland Taylor, and Jason Robards. Joe is currently Head of the Department/Professor at a college in upstate New York, and is happily married. http://www.JoeCosentino.weebly.com


Excerpt from CHINA DOLL, the fourth Jana Lane mystery, by Joe Cosentino, published by The Wild Rose Press
Jana came face to face with Stanley. “If Tate and Gary go, so do I.”
“Don’t do it for me, Jana,” Tate and Gary said in unison.
Stanley grinned. “Listen to your deviant friends, Jana.”
Tate held Jana’s arm to stifle her from replying to Stanley.Stanley glared at Sally Chen. “And if anyone doesn’t like the size of her role, I’ll accept your resignation.” Then staring at Savannah and Jana, he said, “And if any of you regrets signing a contract with me for this show, let this be a business lesson for you. Lawyers enforce contracts.” Stanley clapped his hands again. “Tony, Tate, and Gary, you are released. Kat, please take a seat in the house. Jose, back to your stage manager’s console please. Everyone else, please make a circle around me, and I will lead you in some acting exercises.”
As everyone moved around Stanley onstage in a state of shocked pandemonium, the bookcase set piece teetered back and forth then crashed down on top of the producer.