SEDUCING THE STORY...FROM THE CHARACTER

MUSE MONDAY
The characters who populate my fictional world always guide me from idea to page. What has changed over the years is how well I get to know them before I put their story into novel form. I keep a tight rein on them now, or at least they let me think so.

I considered myself a pantser when I first started writing. Authors are either pantsers (writing by the seat of their pants) or plotters (organized and thought out). I didn’t write an outline or synopsis beforehand. I usually knew the names of my two main characters, what they looked like, and a bit about their personalities. I knew where the story began and where it would end, but none of that stuff in between.


And as a pantser, characters could deceive me or get feisty and hold back important details, dropping them on me right in the middle of a plot line. Give them an inch…


When I entered the world of series writing with true villains capable of murder, writing by the seat of my pants didn’t work so well. But let’s leave plotting for another day. I’m still on characters right now.


Before I write that opening scene, a Character Sketch is created for the players…or at least all of the 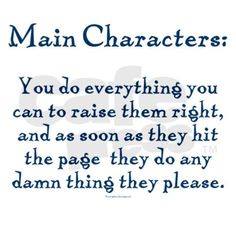 ones I know of. As the story progresses, new characters will pop into the story I had no idea even existed. For those I know of, I record their full name, birth date and place, race, eye color, hair color and style, height, weight, build, skin tone, how they dress, and if they have any distinguishing physical traits or mannerisms. Once I get past the visual, I need to know their personality traits, what their background is, their education, and their occupation. Keep in mind, not all of this will be used in the book. But I have to know it in order to write their stories.


Then comes the real crux of the person: GMC or goal, motivation, and conflict. These three things drive the character and create the story. In my early days, I wasn’t always sure of all three when I’d begin writing. Even now, my characters will throw me a curve at times, but I’m much stricter with them and insist on knowing just why and where we’re going with this adventure.


This week, I’m at the character stage in The Deep Well of Love and Murder, book five in the series. There’s a larger cast of characters involved in this story, and I’ll bring back some from books one through four. Should be fun. Next week, I’ll begin plotting. Oh yes, I now plot.

An inside look for you for book five from the Character Sketch file: remember Laura from book one? She had a very minor role as the wife of Clark Katz. And from book two, do you remember the Meadowlark Range foreman, Randy? His role was even smaller. They’re up front and center in book five. I just found out Randy comes from a colorful ancestry of Brazilian Gauchos on his father’s side, and Laura had to flee her childhood of a dysfunctional family when she was young.


I’ve been writing, with the purpose of becoming an author, for about nine years. I landed my first contract in 2009 and held a copy of my first published novel in my hands in the summer of 2010. Every time I hold the latest published novel, the thrill is the same. Wish me luck in cajoling all of the details out of the characters for manuscript number eleven this week.
Posted by Brenda Whiteside at 4:00 AM