Lee Lines by Kristy McCaffrey with a bonus read

Please welcome Kristy McCaffrey to Discover Yourself. In addition, check out the boxed set she is part of along with Andrea Downing. Blurbs at the end of the post...

Mankind has long been drawn to specific places around the earth, from the mountains of the Himalaya to the Grand Canyon, and to sites such as the pyramids of Giza and Stonehenge. These locations have one thing in common—a preternatural propensity to convey strong electromagnetic earth energy.


Power points—the Hopi Indians of the American Southwest call them “spots of the fawn”—are concentrated areas where such energy comes to the surface. Connecting them are ley lines, or energetic pathways, that have magnetic qualities believed to help birds, mammals, and even bacteria to migrate across long distances. Confirmation by modern measurement has shown these lines to flow in gentle curves along the lay of the land. However, some ley lines, notably in England and South America, are arrow-straight, leading some researchers to speculate that prehistoric engineers who built monuments that fall along these straight paths had a working knowledge of how to harness this energy. They used monoliths and stone circles to naturally align this invisible thread of energy, often depicted as a serpent etched on rocks at these locations.


Why were these locations chosen as points of worship and congregation? Ancient craftsmen knew the mysterious art of manipulation of natural laws, creating dwellings that aided in changes of consciousness, places where the veil separating worlds is barely perceptible. Most humans can sense a difference in a local magnetic field of only a few gammas; sacred sites create anomalies that are far stronger. And these sites have been used for generations. Mont St. Michel in France, sitting atop a small rocky island, encompasses a much older Knights Templar abbey that includes an earlier Benedictine church, all of which sit over a Neolithic chamber containing a prehistoric rock altar.


The human body encompasses, and is a part of, an energy field that is interconnected to everything that exists. Our consciousness can influence, and be influenced, by this energy. From Easter Island to Angkor Wat (in Cambodia and the largest religious monument in the world) to Tiwanaku (a pre-Columbian archaeological site in Bolivia that could possibly date back as far as 15,000 BC), humans have sought to venerate the heavens from key positions on the earth, seeking the profound transformations these sites offer. Temples that direct the inherent geomagnetic properties at these locations were designed for the purpose of mirroring images of the essence of a creator god and, by implication, the order of the universe.


Braden Delaney has taken over the family cattle business after the death of his father, but faced with difficult financial decisions, he contemplates selling a portion of the massive Delaney ranch holdings known as Whisper Rock, a place of unusual occurrences. Archaeologist Audrey Driggs has come to the remote wilderness of Northern Arizona for clues to a life-altering experience from her childhood. Together, they’ll uncover a long-lost secret.


Braden sat across from Audrey, a fire flaming between them, holding the darkness at bay. They’d found a flat patch of land not far from the spot where they’d discovered Blue and had set up a small tent and supplies. Braden planned to sleep outside, and if Blue’s affectionate attentions were any indication, he’d have plenty of warmth from the mutt. Not that snuggling against Audrey didn’t have its merits, but he wondered if it was too soon to make a move.


She’d seen him cry like a baby after all. So much for giving an impression of strength and confidence. Damned if he hadn’t spilled his emotions out like a broken water pump. But in some ways losing his dad had broken him.


The horses and Stevie were picketed nearby munching on oats and grass, and Audrey had prepared peanut butter sandwiches for dinner. After the days’ events, Braden had eaten four.


“What did you want to tell me?” he prompted, running a hand along Blue’s back as the dog lay curled up against him.


Audrey crossed her legs and leaned forward, resting her elbows on her knees. Bundled in her brightly-colored fleece, the garment seemed to heighten the flush of her cheeks to a rosy glow. Although her hair was still pulled back from her face, strands had escaped and framed the soft contours of her cheeks, her eyes a deep blue-green in the flickering firelight.


Her only makeup was a sunburned nose and faint smudges of dirt, and he watched her like a lovesick puppy.


When had it happened? When had he fallen for her?


He hoped she wasn’t about to tell him she had a boyfriend.


“This isn’t the first time I’ve been here,” she said. “When I was nine, my dad took my sister and me for a weekend in the wilderness. I’m fairly certain this is where we were. When you mentioned seeing a family here years ago—I think it was us.”


That caught his attention. He laughed as he scratched behind Blue’s ear, the dog in canine bliss. “I remember you. It was early in the morning, and I was scouting around alone when I saw a dark-haired girl talking to herself.” He grinned. “Then she did a dance.”


Audrey twisted her mouth, appearing self-conscious. She took a deep breath. “Yeah, that was me. First, let me apologize for the fact that we were on Delaney land. I’m sure my dad didn’t realize we’d crossed the boundary between public and private lands.”


She chewed on her lower lip. “So, you should know that as a young child I was very sick.”


Kristy McCaffrey writes historical western romances set in the American southwest. She and her husband dwell in the Arizona desert with two chocolate labs named Ranger and Lily, and whichever of their four children that are in residence. Kristy believes life should be lived with curiosity, compassion, and gratitude, and one should never be far from the enthusiasm of a dog. She also likes sleeping-in, eating Mexican food, and doing yoga at home in her pajamas.


A Cowboy To Keep Anthology 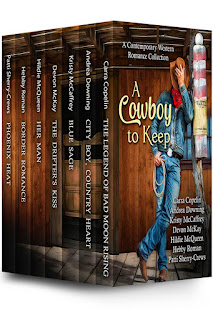 
Sheriff Ben Hammond is finally over the woman who shattered his heart, but when Dinah Horne suddenly returns, can he ignore the passion still burning bright between them?
CITY BOY, COUNTRY HEART by Andrea Downing


Trading horses for subways for two years seemed like a good idea to cowboy Chay Ridgway, but can city girl K.C. Daniels keep a rein on his country heart?


Archaeologist Audrey Driggs rolls off a mountain and lands at the feet of rugged cowboy Braden Delaney. Together, they’ll uncover a long-lost secret.


THE DRIFTER’S KISS by Devon McKay


Determined to take back what belongs to her, Addison Reed will do anything. Even trust a complete stranger.


HER MAN by Hildie McQueen


Deputy Mark Hunter falls for Eliza Brock during a murder investigation. Is it fate or bad luck, especially when she may be involved?


Widow Leticia Villarreal wants to establish a horse-racing stable and old acquaintance John Clay Laidlaw offers to help. But can she trust him with her business and her heart?


After losing her fiancé and her New York City business, Harper Donovan returns to Arizona and meets cowboy Frank Flynn. Will his past and their differences extinguish the heat between them?