THE MUSE KNOWS ALL…but will she let you in on it? by Barbara White Daille

Please join me in welcoming Barbara White Daille to Muse Monday. It's a delightful post so read on!

When I first became a storyteller, no one ever told me there was such a thing as a muse. As I was five years old at the time, they probably figured I wouldn’t believe them. Which is very odd, when you think about it, as they all knew there were already any number of imaginary people running around in my head.
I’m not sure exactly when my muse showed up in my life. But one day, she appeared, and there was no getting rid of her.
A writer’s muse can be male or female, of course. Mine just happens to be female. She’s a bold, brash, take-no-prisoners kind of woman. Me?  I’m a stay-at-home, ultra-shy introvert. As you can imagine, we often clash.
She frequently drags me along—kicking and screaming—to wherever she’s decided to go. When she’s really riled up, she’s inclined to ignore me altogether. Believe it or not, that’s much worse than being hauled along like unwanted baggage.
Over the years, my muse has taken me to places I would never have visited on my own. Once there, she’s put me into the minds of characters I might otherwise never have met. Murderers. Elves. Private eyes. Cowboys. Beauty queens. Dogs. (Yes, dogs. And the ones I’ve encountered have been very intelligent and articulate.)
Lately, I’ve spent quite a bit of time inside the mind of a seventy-something-year-old man.
You might wonder why my muse would ever have hooked me up with a rancher like Jed Garland. That confused me, too. He’s male, a septuagenarian (thank goodness for spell-check on that one!), and owner of the Hitching Post Hotel, which is situated on his ranch in Cowboy Creek, New Mexico. I’m female, almost half his age, and city-born and -bred.
But as I’ve learned over those years mentioned above, my muse often knows best.
Once I got to know Jed Garland, I fell in love with him. Beneath Jed’s gruff rancher exterior, he’s a man with a heart of gold. A softie who looks after his ranch hands and everyone else in town. Most of all, he’s a loving grandpa who wants only to see his three granddaughter happy and settled down—preferably close to him and with men he’s hand-picked for them!
You see, Jed is also convinced he’s a born matchmaker. And I have to admit, after watching him wrangle almost a half-dozen couples into successful matches, the man has made me a believer.
Once he ran out of granddaughters to match up, he branched out to family friends. Many of the couples in Cowboy Creek owe their newfound happiness to Grandpa Jed.
And I owe my muse for introducing me to Jed and for including me in all the fun that goes on at the Hitching Post Hotel.
If you haven’t dropped in to visit there yet, I hope you will!
Here are a couple of peeks at the new book in the series, The Rancher’s Baby Proposal. (FYI, each book can be read as a standalone, as all my heroes and heroines reach their happy-ever-after by the end of their story.) 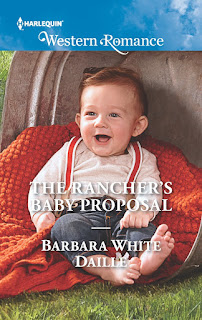 From the back cover:


Ally Martinez has always been known as a fun and flirty kind of gal. But deep down she’s never forgotten the cowboy who left town. When her crush Reagan Chase comes home after a five-year absence, Ally knows this is her big chance. The guy I’ve always wanted. Only Reagan has something different in mind…


Still reeling from his last relationship, Reagan needs a babysitter for his month-old son. With Ally’s help, he can get his family’s ranch ready for sale and get out of Cowboy Creek. The problem? Ally is one seriously cute distraction. But Reagan will do whatever it takes to keep his heart safe. Even if it means losing the only place—and the only woman—he can call home.


(This is from the opening of the book when Ally first sees Reagan again. And don’t tell anyone, but here’s a little secret…Jed Garland has just gone off-page, but that doesn’t mean the crafty old matchmaker has moved very far away!)


Reagan stood looking at her. She stared back, fighting to find something to say. In an instant, she had returned to being the gawky teenager dying for the older boy’s attention. She had never gotten it back then. Now that she had it, she didn’t know how to respond.


Pull yourself together, that’s how.


“Hi, Reagan,” she said, hoping he couldn’t hear the slight tremor of excitement in her voice. “I…I heard what you said to Jed. I’m sorry you’re thinking of selling your ranch.”


“Not thinking of it. Doing it. As soon as I can get the place cleared out enough to put it up for sale.”


His parents had lived their entire married lives in the house on that ranch. Reagan had lived there, too, until he had gone away to school. There must be so many memories wrapped up in the property…and so many personal items in the house. He would need a while to get it ready to sell. Meanwhile, would he spend that time here in Cowboy Creek? She crossed her fingers.


He gestured down the aisle. “Taking care of some shopping?”


“Oh. No. I’m not much of a do-it-yourselfer. I work here, have worked here since I graduated five years ago.” By that point, he had already left town. After getting his degree, rumor had it, he had accepted a fancy job in the big city of Houston, Texas. Smiling, she shrugged. “I’m still only a small-town girl who replaced school with a dead-end job paying barely above minimum wage. But who’s complaining?”


He looked at her thoughtfully. “Do you get any time off?”


Her stomach fluttered as if a dozen butterflies had taken wing inside her. Sad. She had just acknowledged she was no longer a schoolgirl. She should also no longer be prey to her feelings for the boy she had once loved. And yet, she couldn’t tamp down her excitement.


“Yes, I get evenings off. I only work seven to three. And once in a while I have a free day during the week, when I have to work Saturday. But that’s not too often.”


His mouth curved into a small, one-sided smile. “It’s almost three now. If you don’t have any plans for right after work, would you be able to meet me at SugarPie’s for a cold drink?”


“Yes.” Her voice cracked. She hid her nerves behind a cough. “My throat’s very dry. I could definitely use a cold drink.” But none of Sugar’s delicious desserts.


It didn’t matter. With Reagan sitting across from her, she would get all she needed of something sweet.


Barbara White Daille lives with her husband in the sunny Southwest. Though they love the warm winters and the lizards in their front yard, they haven’t gotten used to the scorpions in the bathroom. Barbara also loves writing, reading, and chocolate. Come to think of it, she enjoys writing about those subjects, too!


Barbara wrote her first short story at the age of nine, then typed "The End" to her first novel many years later...in the eighth grade. Now she's writing contemporary romance on a daily basis. Sign up for her newsletter to keep up with the latest in her writing life: http://barbarawhitedaille.com/newsletter