Thanks to Brenda Whiteside, this Fearless Friday is all about R E Mullins paranormal series about the Blautsaugers. This family of vampires goes through a lot to secure their happily ever afters.


Press the Goodreads button at the very end for an opportunity to win a copy of the author’s upcoming release: Cold Hearted Vampire


Each book can be read as a stand alone. Read in order to further increase your enjoyment. 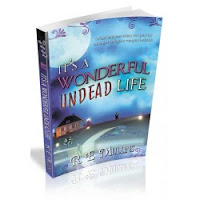 
The story focuses on Gabe, the eldest child of Andris Blautsauger. Cailey, a night-shift phlebotomist, has been found stunted or left trapped in the untenable position between the vampire and human realms. Gabe understands what he’s giving up even as he knows he must finish her turning. If he doesn’t, she will die. What he doesn’t expect is to be captivated by the feisty woman.


Book Two, Vampire In The Scrying Glass is all about gorgeous 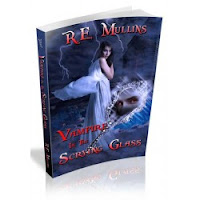 Rafe. The youngest in the family was only a toddler when he saw his mother beheaded by religious zealots. Now a tough Nosferatu Enforcer, he tracks down vampires from the murderous Toltec clan. Knowing vampire/human relationships rarely work out, he can’t stop himself from falling for Cailey’s best friend, Morgan.


Unbeknownst to him, she’s a witch hiding powers she can’t control. When a demon threatens his family, can they come together to dispatch it back to hell? 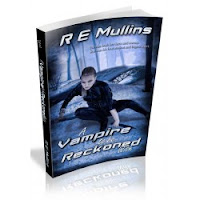 Book three features Metta Blautsauger in A Vampire To Be Reckoned With. This middle child and Andris’ younger daughter is known as the family airhead.


What her relatives don’t know is that Lucas O’Cuinn recruited her long ago and trained her to be an agent for the secretive vampire Orcus Agency. After her mother’s murder, she nobly returns home to tend Rafe. Now that he no longer needs mothering, she’s grown bored with life.


A group of local, human ministers livens things up when they ask for help in taking down a human trafficking group called Servuco. Orcus isn’t happy to learn about their former agent’s unsanctioned activities and sends Luke to reign her in. Can old hurts and new dangers bring them back together? 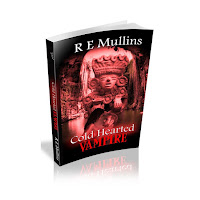 It all concludes in Cold Hearted Vampire set for Internation release on September 6, 2017. The book is already available for pre-order—check below to find where.


Inside you’ll discover the exciting conclusion of the Blautsauger family saga.


Dr. Michaela Blautsauger is on a one vampire mission to complete her blood formula. Her goal—to end vampire dependence on human blood. Learning about a plant which possesses the necessary properties to be her blood base, she sets off for the Yucatan jungle, an area held by their Toltec enemy.


Human Detective Seth Whitehead has been secretly monitoring Dr. Blautsauger for several years. Convinced she has the answers needed to solve a cold case. The next thing Seth knows he’s headed to Mexico to extricate her from the jungle.


What can he do to save her when Toltecs capture her? It seems that Morgan, now a vampire/witch has given him a secret weapon.


Bottom of FormTop of Form


Dr. Michaela Blautsauger, a Nosferatu vampire, is considered an expert in her field of work. However, her skills when it comes to dealing with others and showing emotion is almost non-existent. When Detective Seth Whitehead barges into her lab, she discovers the human is just as interesting as the blood formula she is working on.

Seth's tenacity to find who is committing crimes in Amber Heights pits him against vampire aristocracy as well as Toltec vamps who are nasty to say the least. When the she-vamp he is falling heart over fangs for leaves the country to find the blood plant she needs, he follows and discovers his cold-hearted vamp truly has a heart.

When they both fall into Toltec hands, Seth knows he will do anything he has to do to keep Michaela from suffering harm. But will he be able to keep his own life in the process?


Sweat poured off them, coating their skin as they collapsed down on his tiled entry in a tangled heap.


“What was that?” Michaela panted.


He decided, because it was what he wanted to think, that she sounded impressed. “Can’t let you call all the shots,” he spoke lazily as he slicked a hand up to her waist, and half-heartedly tickled her.


She retaliated by tugging on a bit of chest hair. Playfully, teasingly, they began to grapple. Rolling over and over across the foyer floor. Their hands slipped off slick skin as they tried to best the other in a sexy sort of King-of-the-Hill game.


“The winner gets her way in whatever she wants to do next time.” Michaela laughed. Scissoring her legs, she practically knocked him off her.


Seth whacked his funny bone, and yelped as he crowded her against the front door. Giving up on pinning her, he pushed up on his haunches, and rubbed his sore elbow. They shared a light-hearted and yet intimate grin. “Naked wrestling just topped my list of all-time favorite pastimes,” he told her.


“Oh, yeah?” The competitive little minx cheated by utilizing her vampire strength against him. Flipping him onto his stomach, she sat astride his lower back, and held him down with her palms braced against his shoulders. Her thighs gripped his waist in a hold he didn’t want to break. “Mine too,” she leaned over to whisper in his ear and pressed teasing little kisses all over the side of his face.


Had he ever been taken down so easily by a female half a foot shorter and weighing a good stone less? Or had such a good time being defeated? No doubt, her strength was astounding. That gave him a moment’s pause. He’d just had sex, twice now, with a vampire. Been inside the living undead. Even as the idea boggled his mind, he found he only wanted a chance to do it again.


Because, vampire or not, he had feelings for the lovely and cool Dr. Michaela. From their first kiss, he’d known there was something about her. Something that drew him in. Not just animal magnetism, but the almost indiscernible vulnerability he glimpsed in her eyes. Anyone who thought her cold and unfeeling had obviously never looked below the surface—or had her in the sack.


She was open in her lovemaking. Kept nothing hidden. It made him wonder why she considered it so necessary to keep her passionate side concealed the rest of the time.


His front door suddenly slammed open. Hitting hard against Seth’s hip, and almost knocking Michaela off of him. Their private time ended as three men clambered through the broken entry.


Seth instinctively reached for a weapon that wasn’t there.


“Dad!” Michaela squealed, and everything inside him froze as solid as ice. Scrambling off Seth’s body, giving a flashing view of that lovely backside, she attempted to use his body as a shield.


Even as he sat up straight, she was tugging at him and cowering behind his back.


Catching the look of pure venom in Andris Blautsauger’s eyes, Seth slapped a hand to his forehead and groaned.


Things were about to get really ugly.


I hope you enjoyed this peek inside Cold Hearted Vampire.


Ready for preorder at Amazon


Or any online book outlets.


See what else the author is working on at remullins.com


Goodreads — go to Goodreads to enter a giveaway. Your name might be picked to receive a copy of Cold Hearted Vampire. Contest ends soon so hurry.


Thanks again to Brenda Whiteside for graciously hosting me today on her Discover Yourself Blog.

Email ThisBlogThis!Share to TwitterShare to FacebookShare to Pinterest
Labels: A Vampire to be Reckoned With, Cold Hearted Vampire, Discover Yourself, Fearless Friday, It's a Wonderful Undead Life, R. E. Mullins, Vampire in the Scrying Glass