Hairy Lizards at the Top of Our World

A few years back, we retired from the day jobs. You followed our farm experiment here on Tortuga Thursdays for three years, but we sold the farm. We traded in the little RV for a bigger one, but we aren’t ready to hit the road fulltime. What comes next? We’re not sure. It's all about transition these days. These are...
The In-Between Years

Taking a drive used to be a popular and cheap form of entertainment. Probably where the blasphemy Sunday Driver came from.  On any given day of the week, my dad would complain about slowpokes in front of him on the road: “damn Sunday driver”. I assumed people drove slower on Sundays, but I never understood why.


We took family drives when I was a kid. Sometimes it had to do with my dad’s job, other times we’d head north to see snow, but most of the time it was for a simple ice cream cone or spin outside the neighborhood.


Taking a drive has come back into our in-between years life. We’re lucky to be living in an area where there are back roads and natural wonders we haven’t explored before.


A few days ago, we drove the 300 road which is a dirt road that runs along the Mogollon Rim. (pronounced moe-ge-own) This mountain road, not much more than a path in some spots, puts you at the top of the world. Our drive began at the turn off for Woods Canyon Lake and ended at highway 87. There are a few lakes along the way and lots of signs to warn you to watch for animals. We checked out one of the lakes, but I’m sorry to say the only wildlife we ran into was two hawks, a squirrel that looked like a hairy lizard, and a bird.


The last half of the forty-four-mile trip was rough road because of all the rain they’ve had up on the rim. We had to slow to a crawl to get over and around boulders. And in order to keep your spirits up, the mileage markers were a joke. At one point, we saw a sign for twenty-two miles to the main highway. We drove five miles and the next sign said twenty-two miles to the main highway. Eventually, we came to a sign that said eleven miles. We drove four miles and a sign posted eleven miles to the highway. We drove six miles and the mileage sign stated twelve miles to the highway. FDW figured we’d entered The Twilight Zone. I started singing “And the road goes on forever, and the party never ends.” 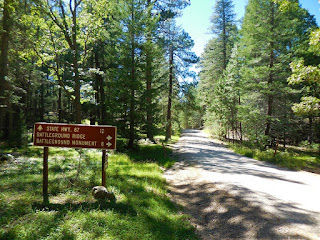 We did make it out alive.
Posted by Brenda Whiteside at 3:00 AM