Kris Bock on Inspiration from a Bird of Prey

Please welcome Kris Bock to Muse Monday with a most inspirational and fun post. Take it away, Kris. 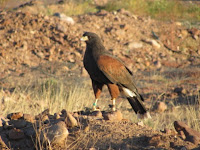 On a beautiful fall afternoon, just outside of Socorro, New Mexico, we witness the ancient battle between hunter and prey. This hunter, weighing in at under three pounds, is a Harris hawk named Etta.


Falconer Matt Mitchell releases the bird and moments later we’re striding across the scrub desert. Etta flies ahead, soaring 20 or 30 feet above the ground before landing on a small tree. We pass by, trying to flush a rabbit from the brush. When we get ahead, Matt raises his left arm, which is protected by a thick leather glove, and the hawk flies to him.


As the late afternoon sun drops towards the horizon, a jackrabbit bolts from a bush. The hawk takes off on silent wings. Seconds later she dives behind a bush. The rabbit shrieks.


We run toward the action. The rabbit has vanished, leaving only a tuft of fur caught in the bush. One of Etta’s feathers sticks out at a sharp angle. I’m probably imagining her indignant glare. “She got beat up,” Matt says. “That rabbit put some moves on her. The jackrabbit went around these bushes in figure eights and whatnot and stalled the bird out. The bird ended up on the ground and the rabbit took off.”


Chalk one up for the prey.


I met Matt several years ago. I tagged along on hunts and visited his home to see newly hatched hawks and falcons. Raising falcons is an intense, time-consuming, and expensive hobby, but as an author, I could do the next best thing – I could write about it.


In What We Found, set in a small town in central New Mexico, a young woman stumbles on a dead body in the woods. Audra gets drawn into the investigation, but more than one person isn’t happy about her bringing a murder to light. Fortunately, she has some allies, including her brainy 12-year-old brother and self-appointed sidekick, Ricky. And because this is suspense with a dose of romance, she has a love interest, Kyle.


Audra accompanies Kyle on a falcon hunt. As you can see, this scene is closely based my experiences with a falconer.


We strode across the desert, angling to pass by bushy patches where rabbits might be hiding. The

hawk flew ahead again, soaring about twenty feet above the ground before landing on a small tree. She waited until we passed by, then made another hop, farther that time. Kyle raised his left arm to shoulder height. The hawk flew back and landed. Watching her come in sent a strange breathless thrill through my chest. I’d seen owls and eagles fairly close in the zoo, but there they were sitting quietly on perches. This was a glimpse of something wild and beautiful.


A jackrabbit bolted out of a bush twenty paces ahead. The hawk took off after it.


Seconds later, she swooped down behind some bushes several hundred feet away. She rose up, made a small loop, and dropped down again. Something shrieked.


Kyle was already running toward the action. By the time I got there, he had the hawk on his arm again. She had a feather sticking out awkwardly from her wing. I didn’t see the rabbit and wondered if Kyle had hidden it to make it easier on me.


“She got beat up,” Kyle said. “That rabbit had some moves.”


He nodded and plucked a small tuft of gray fur from the bush. “She made contact. But this time, it looks like the rabbit won.” He opened his fingers and the small tuft of fur drifted away on the breeze.


“It happens sometimes. Fortunately for our girl, she won’t starve.” He looked into her black eyes. “It’s frozen quail for you tonight, my dear.”


The falconry aspect helped me develop thematic elements of What We Found, added some unusual action, and provided readers with insight into an usual pastime. One reader wrote, “The falconry aspect was almost as intriguing as the unveiling of the murderer!”

Kris Bock writes novels of suspense and romance with outdoor adventures and Southwestern landscapes. The Mad Monk’s Treasure – currently free at all e-book retailers – follows the hunt for a long-lost treasure in the New Mexico desert. Whispers in the Dark features archaeology and intrigue among ancient Southwest ruins. In Counterfeits, stolen Rembrandt paintings bring danger to a small New Mexico town.


Fans of Mary Stewart, Barbara Michaels, and Terry Odell will want to check out Kris Bock’s romantic adventures: “Counterfeits is the kind of romantic suspense novel I have enjoyed since I first read Mary Stewart’s Moonspinners.” 5 Stars – Roberta at Sensuous Reviews blog


Read excerpts at www.krisbock.com or visit her Amazon page. Sign up for the Kris Bock newsletter for announcements of new books, sales, and more.
Posted by Brenda Whiteside at 3:00 AM

Email ThisBlogThis!Share to TwitterShare to FacebookShare to Pinterest
Labels: Discover Yourself, falcons, hawks, Kris Bock, Muse Monday, What We Found