#FearlessFridays and Facing Your Fear of #FreshStarts by Addison Brae

Since I'm a Bathophobic (fear of being underground or underwater), I'm enjoying today's Fearless Friday. I haven't conquered mine yet, but you'll be delighted to read about Addison Brae and some other phobias. 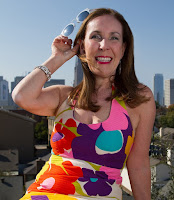 Do you ever get dizzy, breathless, or nauseous at the thought of flying, sharks, tornados, hurricanes, earthquakes, or even learning something new? The National Institute of Mental Health reports an estimated 9.1 percent of U.S. adults had a specific phobia over the year of the study, and the prevalence was 12.2 percent for females.

Here are some achievements I certainly didn’t tackle fearlessly, but rather faced my fears head-on. These adventures may not be phobias, but at times my heart raced. I felt like I would throw up any second. The good far outweighed the bad, and in hindsight, I don’t regret any of these journeys.

The achievement that sticks with me most was leaving my second husband. It was an emotionally abusive relationship about to explode to violence. Before I left I was afraid for my life at times. The fear of stepping out into the single world again brought an entirely opposite fear. These experiences inspired Becker Circle, my third manuscript and first to publish.

Seventy-four percent of people in America know someone who’s a domestic abuse victim, which is why a portion of my proceeds go to Hope’s Door New Beginnings Center, to help raise awareness and stop the horrible trend. The good news is we always have a way out. Fresh starts are scary. They almost always come with doubts like Gillian, the main character in Becker Circle, experienced, but those doubts are rarely worse than what already happened. Fresh starts come with experimentation. We screw up. The sting reminds us we’re not numb.

Facing fear of leaving and a new beginning led to another adventure, vacationing in Puerto Rico--alone. A few years later, it led to something else that causes shortness of breath and racing heartbeats--falling in love.

Today’s Fearless Friday. You don’t have to be fearless, but I challenge you to stare down a fear today.
You can find Becker Circle on Amazon.  Connect with Addison Brae on website, Tirgearr Publishing, Twitter, Facebook or YouTube.

About Becker Circle
New degree. New job. It’s Gillian’s fresh start across the country. So much to experience. A giant past to forget. Gillian’s sense of humor and best friend help her maintain her self-respect when most every jerk in the neighborhood hits on her. Who know a fresh start could threaten her dignity—and even her life. Watch the trailer.