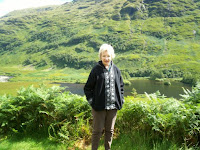 I’ve always loved Scottish Historical Romance. In the early days, fabulous books like Barbara Michaels’ The Master of Blacktower drew me in. I thrilled to the misty, brooding atmosphere of moor, mountain and glen, and desired a brooding hero to match. When I met my best friend in High School (incidentally, she’s still my best friend today), one of the first things I said to her was, “I write books about Scotland”. So I guess it’s fitting the book that let me break into print with my now publisher, The Wild Rose Press, was just such a story, Devil Black.

Of course, such a hero demands a heroine of strength, one who won’t back down—one who, perhaps, never imagines just how tough she is, till she runs into him. Throw in some details from Scotland’s turbulent past, and you have a book in which you can lose yourself. Ah, romance!

Readers often ask me how I moved from writing Scottish Historical Romance to other genres, like Steampunk. Here’s a little secret: they’re not all that different. They’re set in different historical eras, it’s true, but if you take a look you’ll find all my heroes are either devilishly dark, or fascinatingly damaged. Like Finnan MacAllister, from His Wicked Highland Ways, who’s had readers screaming at him through the pages since the book first came out.

So, what’s your idea of the perfect Scottish hero? 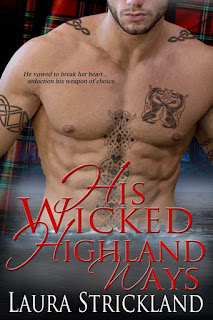 His Wicked Highland Ways blurb:
Widowed following a marriage of convenience, Jeannie MacWherter has fled lowland Dumfries, Scotland, for the highland cottage bequeathed to her late husband by his brother-in-arms, laird of the glen. Though she’s never met the laird, local rumor labels him both murderer and seducer—a wicked, dangerous man who Jeannie learns is determined to chase her from his land.

Finnan MacAllister has come home to Glen Mhor in order to right past wrongs. He doesn’t care that Rowan Cottage is the beautiful Widow MacWherter’s only refuge. He’s convinced she’s a wanton who deliberately broke the heart of his best friend, Geordie, and he’s vowed to get even with her: seduction is his weapon of choice. But will his own heart betray him?

Excerpt:
The man arose from the pool stark naked and dripping wet, like a god newly formed. Jeannie took another half step backward and blinked, not entirely believing the sight that met her eyes: some six foot of male, all rippling muscles, scars, and tattoos, with a curtain of sopping red-brown hair that slapped his shoulder blades, and a handsome, dangerous face. His eyes were tawny brown, almost the same color as his hair, and spiked by wet, black lashes. But after one glance, Jeannie could not make herself look there.

Instead her gaze dropped—and dropped. Sweet, merciful heaven! Was that how men came equipped? She might be a widow in name, but she had never seen her husband, Geordie, naked. Theirs had not been that kind of relationship, or that kind of marriage.

But she had an eyeful now, right enough, and for the life of her could not keep from staring. What a ridiculous, daunting, and marvelous appendage! How did men ever manage to walk around like that?
But this man did not attempt to walk. He merely stood in the shallow pool with the water lapping around his…Jeannie’s strained mind supplied the word “weapon”…and gazed at her as if he found her as hard to fathom as she found him.

Ah, and she never should have walked so far down the glen. But dearly as she loved Aggie, Jeannie sometimes needed to escape her chatter, and the beautiful day had lured her on.
Into danger, clearly. Who was he? Obviously someone of ill repute, a traveler, a dangerous outlaw, a madman. What if he decided to use that terrible weapon on her, and she on her own?

Instead he spoke the way a man might to a frightened horse. “There, now, no need to be afraid. I’ll not harm you.”

Jeannie took another judicious step backward. If she ran, would he be able to catch her? No doubt, given those long, muscular legs.

She shook her head, and her hair tumbled about her shoulders. Never well-disciplined, the yellow curls invariably escaped their pins, and she’d lost most of those on her walk down the glen.

He spoke again, in a voice smooth as warmed honey, lilting, and very Highland. “Where are you from, lass? You’ll be a maid at Avrie House, no doubt.” Deliberately he snagged his plaid, which lay on the bank, and wrapped it around his waist.

Author bio:
Born and raised in Western New York, Laura Strickland has pursued lifelong interests in lore, legend, magic and music, all reflected in her writing. Though her imagination frequently takes her to far off places, she is usually happiest at home not far from Lake Ontario with her husband and her "fur" child, a rescue dog. Author of Scottish romance Devil Black as well as The Guardians of Sherwood Trilogy, she is pleased to say that His Wicked Highland Ways is her eighth title for The Wild Rose Press.