The Irony of Paradise by D.R. Ransdell #romance #Greece 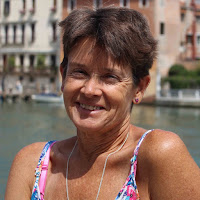 Please welcome my guest, D.R. Ransdell. Love the islands and always wanted to go to Greece. But there are pitfalls...read on!
Irony is a friend to the storyteller because ironic twists hook your readers and leave them rooting for more—especially when the ironic ending is something they didn’t imagine until you laid it out for them. Hence, an idyllic island setting is actually the perfect backdrop for a troubled romance.
After all, what could be more romantic than a Greek island with private beaches, sparkling waters, and colorful sunsets? On the other hand, in our own lives, how many times have we planned the perfect romantic vacation only to have it backfire? The charming hotel we picked out was staffed with snippy workers, the remote location was visited by everyone and her grandmother, the tourist attraction was so overpriced we couldn’t enjoy it?
I fell in love with Greece one summer on a university tour. I loved the archaeological sites, the rugged beaches, and the nights of bouzouki music. I fell in love with the sounds of a language I couldn’t understand and a people who loved late nights as much as I did.
When I returned to the U.S., I started studying Greek. I ripped through four semesters and took a job on the island of Rhodes. It was my dream job! I would spend a whole year teaching English in Greece, learning Greek, and living the life of paradise!
But Rhodes wasn’t paradise. The people weren’t friendly to me unless I was spending money, my salary was so low the most I could afford at a bar was a coffee, and the beautiful summer was followed by incessant, chilly winter rains. Who knew?
But as any writer knows, hardships are the stuff of fiction. And thus for Island Casualty I created by own paradise, complete with those same beaches and bouzouki tavernas, and then proceeded to torment my characters accordingly. Andy Veracruz heads for Amiros for a well-deserved vacation, but his main goal is to romance a woman he’s met back in California. Before he can get very far into his quest, however, he makes a casual acquaintance at a café. The man accidentally leaves behind a package—which turns out to contain an engagement ring.
At that point Andy loses his concentration. Who can enjoy the beach when an engagement ring needs to be returned? What can be done when its owner suddenly disappears? Andy’s vacation turns into a manhunt, a tale of unrequited love, and a cautionary tale all wrapped up in an island that’s really no paradise. That’s both the irony and the hook. So if you’d like to make a quick armchair trip to Greece, you might like to check out Andy’s adventure. You’ll get a taste of paradise, but you get to leave before it’s too late!
Book Blurb:
Low-down: A lost engagement ring, whizzing bullets, and a midnight Vespa ride add up to a terrible vacation!
When Andy flies to a Greek island for a holiday with Rachel, he expects to spend afternoons swimming and nights making love. But at an outdoor café, he meets a fellow traveler who accidentally leaves behind a package. Before Andy can return it, the man disappears. When Andy substitutes in a bouzouki band, he learns more about the island and its missing man than he intended to. By accident he winds up in the midst of a family saga worthy of the ancient Greeks themselves. He yearns to return to California, but how can he abandon his new friends before unlocking the island’s secrets?

Excerpt:
I locked the apartment and took a bus to LAX. A couple of hours later I boarded a flight to Athens. By the next night I was on a ferry bound for the Dodecanese islands. For twelve hours I watched the waves, imitated the natives by swinging my new plastic worry beads, and mourned a woman nicknamed Butterfly.
I hadn’t picked out the name myself. One of her previous lovers had seen to that. He’d used the Italian version, Farfalla. Either way the nickname fit. Like all butterflies, she’d been beautiful, ethereal, unique. She’d flitted around from one man to the other as a real butterfly skips among flowers. I’d watched her in perfect wonder along with all the other men who came under her control.
“Enough,” I told myself time and time again. But I never listened. Instead the words kept haunting me. Butterfly, Farfalla, Butterfly, Farfalla. I went back and forth and back again. Fooling around with the dictionary on my phone app, I found that the Greek version was even more sonorous. It was Louloudi. Loo-LOO-dee. I said the syllables over to myself as a mantra. Louloudi, Louloudi, Louloudi.
By renaming her, I hoped to push her away.
Buy Links:
Amazon link: http://mybook.to/islandcasualty2
B & N: https://www.barnesandnoble.com/w/island-casualty-d-r-ransdell/1120979158?ean=9781938436307