In The Book: When #Inspiration Strikes #99c #eBook #sale #BOOKSPECIALS 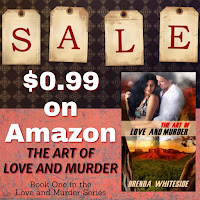 I was surprised yesterday to see The Art of Love and Murder, the first book in the series, on sale for $.99. The eBook is exclusively on Amazon. It's part of the Amazon Encore Imprint. Unlike a normal publisher, Amazon doesn't communicate with me about the book so I'm not notified of things like sales and promotions. Don't ask. Hard to explain.

It's a great deal. It also gave me pause to think about that first book way back when. What inspired me to write the book and start the Love and Murder Series.

I purposely set out to write a Romantic Suspense. In brainstorming with FDW, I came up with a few ideas. I needed murder. I needed romance. So I did a what if exercise. What if my heroine was adopted but never knew her parents because they were killed when she was a baby? What if her husband is dead, her adopted father is dead, and she's just had the funeral for her adopted mother? What if she decides to find out more about her biological parents? What if she's half Native American and half Austrian? (I don't know why. It just came to me.) What if she loves chai but owns a coffee cafe? And the rest was research and imagination.

I chose Hopi for her Indian half because the reservation is near Flagstaff, Arizona. And I can say Indian because I am too and I don't mind that terminology. I love Flagstaff. When I researched the Hopi, I discovered that "Hopi" is a shortened form of the original term Hopituh-Shi-nu-mu, for which the most common meaning given is "peaceful people." Loved it. I decided my hero would be half-Hopi also and a sheriff. He chose law enforcement so he could be a peacekeeper.

There were many more aha moments, but that's enough for now. If you haven't read it, please take advantage 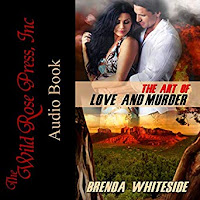 of the $.99 sale. But don't wait too long. I have no idea when Amazon will put it back to regular price. Click HERE.

If you're an audio person, it's also available in audio from iTunes, click HERE or Amazon, click HERE.

Happy reading or listening.
Posted by Brenda Whiteside at 12:30 AM

Email ThisBlogThis!Share to TwitterShare to FacebookShare to Pinterest
Labels: amazon, Discover..., eBook sale, In the Book, inspiration, The Art of Love and Murder