In the Novel with Casi McLean #Muse Monday #Inspiration #NewRelease 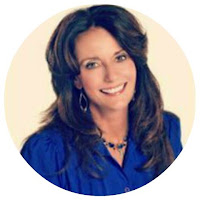 Please welcome my friend, Casi McLean, today. I've read some of Casi's novels and they're a treat!

Hi Brenda. Thanks so much for hosting me on your wonderful blog today. I want to share my new release and the inspiration that triggered my Lake Lanier Mystery series.

Ever since my childhood imagination discovered Madeleine L'Engles, A Wrinkle In Time, the idea of time travel intrigued me. Reading H. G. Wells' Time Machine as a yourth added to my fascination. Later, adult novels like Diana Gabaldon's Outlander enticed me further. Whenever a time travel movie released, they mesmerized me. Back to the Future, Somewhere in Time, The Lake House, and Time Traveler's Wife and made-for-TV stories like Two Worlds of Jenny Logan and The Philadelphia Experiment…I couldn’t get enough to satisfy my passion. [If you love time slips, the last two are DVD's available on Amazon.

As an author, if you choose time travel as a genre, the options are endless, but if you don't generate a believable portal, or confuse details, you'll lose your audience. Readers want to believe in the "what if" possibility, if only in the corners of their mind. They look for mistakes, fallacies, and the absurd. So, writing time travel is challenging...but extremely satisfying and a wonderful way to escape into imagination, intrigue, and the lives of the characters. I always wanted to write time slips that would leave readers saying: “If time travel was a thing, this is how it would happen.” And I achieved my dream with Lake Lanier Mysteries.

A ghost town time forgot––Atlanta's Lake Lanier, a man-made lake with fascinating history, eerie lore, vanishings and odd occurrences totally fascinated me, swirling stories and characters around a plausible theory. What if the lake construction triggered a seismic shift that, when given enough energy, opens a portal connecting past to future? What a perfect setting for a time-slip romantic suspense series. Lake Lanier Mysteries evolved.

Book one, Beneath The Lake, won 2016 Gayle Wilson Award of Excellence Best Romantic Suspense. The story revolves around Lacey Montgomery, a young woman attending a party on the shores of Lake Lanier. When she walks in on her boyfriend in a compromising situation, she tears away into the throes of a torrential storm…her car spins out of control and hurtles into the depths of the icy water. She awakens in the arms of a stranger, in a town she's never heard of––34 years before she was born.

Beyond The Mist, book two, continued the saga with a two minor characters from the first novel taking the lead roles. Their story rips them through time to 2001 New York and a terrorist attack that will live in infamy.
Between The Shadows, book three, brings the series full circle with dual heroines and heroes. The story unfolds the destiny of two star-crossed couples, when the desperate plea from a beautiful ghost beseeches a character to come to her aid. Thrust back in time, Kenzi and York never expected to confront deadly villains plotting to steal Confederate gold…or find love in 1865.

All three stories stand alone, but reading them in order crafts a unique saga with multi-dimensional characters and a gripping tale. Available in print, eBook and on Audible, Lake Lanier Mysteries will lure you in. For me, the characters drew me into their stories. I was simply the vessel to bring them to life.

Thrust back in time, Kenzi never expected to confront deadly villains––let alone fall in love with one. 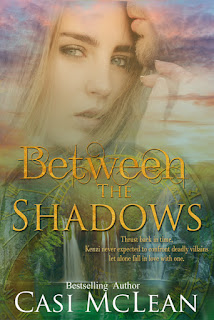 She never expected to confront deadly villains…let alone fall in love with one…
After her friend, York, encounters the ghostly image of a young woman, Mackenzie Reynolds seizes the opportunity to initiate a time jump, thrusting them back to 1865 Georgia. Resolved to thwart the girl’s untimely fate, Kenzi stumbles into a deadly conflict over a stockpile of stolen Confederate gold.
An injured Civil War survivor, James Adams departs for home with a war-fatigued companion he’s determined to help. After pilfering a horse and kidnapping a woman, he never dreamed his hostage would steal his heart.
Kenzi and James must unravel a deadly plot, while helping York save his ghost woman from a brutal death. But can she leave York in a violent past to save James’s life?

A Gripping Novel By Award-Winning Author Casi McLean
Excerpt:
“Don’t you dare die on me, James Adams.”
Kenzi pressed a wad of blood-soaked gauze against his abdomen. “I won’t lose you. Not now.”
Barely clinging to life, the man opened his eyes a slit, raised the gun still tightly gripped in his hand and shot off a round.
Stunned, she snapped around. “No.” Screaming, she dove for the barrel through a hazy blue mist.
Again, the gun rang out as the patient fell unconscious.
“Help. Someone, please help”.
A muted voice murmured from beyond the fog. “Dr. Reynolds? Is that you?”
Her frantic reply cried out, “Yes, of course it’s me. Hurry. He’s bleeding out.”
“Brady...” James’s voice faded as he slipped into semiconscious mumbling.
Yanking the pistol from his grip with her right hand, she maintained pressure with her left. A heartbeat later, the cylinder encasing them rotated open. Kenzi stood then sprinted across the room past an attendant then pounded on a fist-sized alert button affixed to the wall. The resulting alarm shrieked through the underground chamber, reverberating as it radiated throughout the compound. A second man dressed in a white jumpsuit burst through double doors.
“Gurney. Now.” Kenzi screamed at both attendants. “And O-Neg blood. Hurry. Go, go, go.” She ran to James and knelt beside him. Lifting his head, she slid a knee underneath it for support and smoothed a chunk of his dark brown hair from his face. “I’ve sacrificed way too much to have you die now,” she whispered. “My ass will burn for this. Not to mention the repercussions for abandoning York.”
Pulse racing, she checked his bandage. Despite her efforts, streams of crimson still oozed from the wound. Pressing again on the gauze, she shook her head. “Oh God. I have no idea what blood type you are, but you should tolerate O-negative.” She pressed harder on his wound. “Jesus help you, James. You’ve lost so much blood. Just please, hang on.”
Again, the double doors swung wide. This time, a gurney pushed through, followed by the two men. One ran to Kenzi’s side.
“Help me lift him.” Her hands, slick with blood, shot to her white T-top, already drenched in crimson. On a second thought, she swept them down the rear of her jeans.  Then, sliding her slippery arms beneath his back, she braced her stance with one bent knee.
“One, two, three.” They heaved him in tandem onto the gurney. She snatched a bottle of Betadine from the attached supply basket and doused her hands then splashed more on James’s forearm, grasped an IV and punctured a vein on the inside of his wrist with the sterile needle. Once connected, she hooked the blood pouch on the IV pole and barked at the team, “Let’s move. If this man bleeds out, there will be hell to pay.”
The men, poised with hands on the side of the rails, awaited their next move. “Where to, Dr. Reynolds?”
Kenzi stared at James’s ashen face, worried her meager experience wasn’t enough to save his life––but she had no option. “Surgery.”
Springing into action, one man rolled the gurney down the hallway, while a second leapt onto the base and slipped an oxygen mask over James’s nose and mouth. “I hope this guy isn’t allergic to Propofol.” He attached an anesthesia drip to the IV. “Judas Priest. What happened to him to cause such a gaping wound?”
“He was shot...with a musket.”