Inspiration from a Premonition by Cyndie Zahner #paranormal #premonition

Please welcome Cyndie Zahner to Muse Monday with an inspiration that will give you chills.

Project Dream is fiction but was inspired by real life.

I have had several paranormal experiences throughout my life. For years, I thought I was crazy. Then I had a premonition of 9/11 two months before the Twin Towers fell.

I kept notes about the vision on a work calendar. My notes were vague at best. I didn’t know what building was going to fall. I didn’t know what would cause it to collapse. I wasn’t even sure it was in New York State, let alone New York City.  I only felt like the building existed somewhere in northeastern America by a body of water, maybe a Great Lake. I couldn’t decipher with any accuracy the true capacity of what was about to happen.

For years after, I questioned why I had such a premonition. It hadn’t helped anyone.

Yet, I began thinking. What if it had? What if someone with a keener sixth sense than me—and I know there are many people with psychic abilities—had been able to prevent a death?

Ten-year-old Izzy Jimenez does just that in the opening of Project Dream. The scene is based on another vision I had while saying prayers in a small chapel in my hometown.
Many years ago, a new friend asked if I would like to visit a side chapel of a Catholic church. In Project Dream, that chapel is in San Diego, but in real life, that little sanctuary is in Erie, Pennsylvania.

The chapel struck me as lovely. I knelt beside my friend and immediately began praying. I don’t recall who I prayed for, probably one or all three of my kids. Regardless, there I was—I like to say I was minding my own business praying—when I had this swooshing feeling like an angel came down out of the ceiling. I’ve had these experiences before and often ignored them, blaming everything on my wild imagination. This time, however, the woman, white spirit, ghost, whatever you would like to call her, was relentless. She wouldn’t leave.

She said, quite clearly, “My daughter doesn’t believe in this sort of thing.” She chuckled, told me she wanted her daughter to know she loved her, and just before she left, she opened her arms and showed me roses.

The dream seemed so real that I was quite shook up. When we were leaving, my friend asked what was wrong.

I said, “You are going to think I’m crazy, but I think the mother of one of those women in that chapel appeared to me.”

Of course, she looked at me like I was nuts. But still shook, I described the things I heard the woman express, and my friend became quiet.

“What was the woman’s name?” she asked.

I told her I’d seen lots of spirits but I never seemed to get their names right. They usually only gave me feelings or showed me signs. Then I remembered, and said, “oh wait, the woman’s name might have been Rose.”

My friend was quiet for a long time. I was sure she thought I’d lost my mind. The silence was piercing. Finally, she spoke. “My mother’s name was Rose.”

And from that true-life experience, I conjured up the entire first chapter of Project Dream. 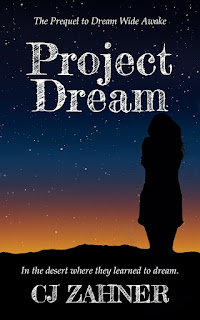 Blurb:
What happened to the kids in Area-51?

In 2002, the CIA removed teens from detention centers and placed them in a National Security Test Program called Project Dream. Children selected had two characteristics: physical superiority and a sixth sense.
When the awkward, destitute Izzy Jimenez is caught stealing clothes, authorities enroll her for two reasons: Izzy swims like a fish—and she sees angels.
Terrified and alone for the first time in her life, Izzy finds herself in a military school set deep in the belly of a desolate Nevada desert within Area 51. There, she attends classes and learns to perfect her clairvoyance, hoping authorities will allow her to go home. But when she and other students master remote viewing and produce results that stun White House officials, additional children are recruited, and Izzy’s hope of going home dwindles.
Not until the beautiful and popular Rachel Callahan arrives and befriends Izzy does her life become bearable.
Project Dream is a coming-of-age story of teenagers thrown into the most unusual circumstances. Each struggle to survive their time in the desert with the goal of getting out and going home, but—
Can any of them really go home?
Links:

In 2001, two months before the Twin Towers fell, Zahner began having vague weekly visions of first, approaching a city from a plane’s view and, second, being inside a collapsing building. The visions continued until the September 11th fatal disaster. Throughout her life, Zahner had other premonitions, but not until this premonition did she consider her visions had merit.

Although her 9/11 premonition was indistinct and helped no one, it did inspire her to ask: could someone with a sixth sense develop the ability to prophesize future events and protect people? With that, her Dream Series was born. Now she uses past real-life premonitions she’s experienced as the basis for scenes in her novels.
Excerpt:

When the woman neared, Izzy turned. “Hello.”
“Hello.” The woman nodded and walked by.
Izzy closed her eyes and scratched her forehead. If only she had been born with a flowing tongue like Belo said of Enrique.
“Ma’am.” She couldn’t open her eyes when she heard the lady turn. “Did your mother die?”
Oh, that sounded horrible. Why had she asked such a thing? She wasn’t even sure the white spirit was her mother.
“Of lung cancer?” Izzy opened her eyes. “She smoked, right?”
The lady stared but didn’t say a word.
“She says you shouldn’t go to New York City.”
The lady’s face wrinkled. “What?” She sounded cross.
“I’m sorry. It’s—well.” Izzy scratched her nose. She might be breaking into hives. “I saw this lady by you and she kept slashing the letters NYC like you shouldn’t go there and she wouldn’t stop, so I thought I better tell you. She kept doing it over and over and, well, I know she doesn’t want you to go to New York City.”
The woman took a step toward Izzy. The wrinkles melted from her face. “I do have a trip scheduled to New York. Next week. For a conference.”
Goosebumps crawled over Izzy’s skin. Whenever people, real human beings, confirmed what the white people told her, chills spread through her.
The lady stood still, waiting for Izzy to say more.
Izzy scratched and the lady stared.
“What was her name?”
“What?”
“My mother. What was my mother’s name?”
The woman appeared hopeful. She held her breath, waiting. But Izzy didn’t know the woman’s name. She had difficulty hearing the white people. Usually, they simply gave signs.
Yes, signs.
“Oh.” Izzy held a finger up. She remembered the sign. “Rose? Is your mother’s name Rose?”
The chapel door opened behind Izzy, and she heard her mother’s voice. “Izzy, what are you doing?”
“Nothing, Mama.” Izzy sidled down the hall toward her mother.
“I hope she wasn’t bothering you.”
The woman said nothing. She stared at the two of them, a perplexed expression tainting her face. After a time, she left the building without saying more.
“Izzy,” Mama barked. “What were you talking to that woman about?”
“I only said hello to her, Mama.”
Her mother gazed at her skeptically. “Remember what Belo said. Don’t talk to anyone.”
“I didn’t, Mama. I promise.”
“Go collect your things. Your brother called. It’s time to pick him up.”
Izzy hurried back into the chapel and grabbed her coat, missal, and satchel. She smiled and waved goodbye to Jean as she exited.
Eight days later, the World Trade Centers collapsed. Izzy prayed the woman from the chapel had not been inside. She watched for her in church on Sunday and at the chapel during the week when she and Mama went to pray for the people who had died, but Izzy didn’t see the woman.
Three weeks after September 11th, Izzy and her mother visited the chapel on a Sunday evening once again. The lady was sitting in the pew next to the woman named Jean. When Izzy walked in, she heard the lady say, “That’s her. That’s the girl.”
“That’s Isabelle Jimenez,” Jean said.
The woman stood and rushed toward Izzy. Jean followed.
“Mrs. Jimenez?” The lady glanced at Izzy’s mother.
“Yes?”
“Mrs. Jimenez, your daughter saved my life.”
Izzy’s mother made her spend the next two Saturday afternoons praying in church. But it was too late. Saving that woman’s life would prove Belo right.
They would come for her.