To Judge or Not To Judge by Debra H. Goldstein #fearlessfriday

Please welcome Debra H. Goldstein, wait...Judge Goldstein...to Fearless Friday. Giving up, what seems to me, a fascinating job of being a judge to follow her dream really is fearless.

Judges learn many things in “Judge” school – how to dress (black robe), keep a straight face no matter what lawyers or witnesses say, apply applicable law to the facts of a case, and avoid any appearance of impropriety. Because of my training, I deliberately kept my two careers separate when I began writing fiction.

Consequently, I didn’t make a big deal of the publication of my IPPY winning academic mystery, Maze in Blue, or mention to anyone in the office when I sold my second book, Should Have Played Poker. I thought I could easily balance my passion for writing and my lifetime judicial appointment. It didn’t take long for my win-win plan to be tested.

I was sitting on the bench, in my black robe, about to end a hearing with my usual, “Is there anything more?” The attorney in front of me, who’d been trained to answer “No, your honor,” did exactly what he was supposed to do. Unfortunately, his client interrupted him: “Your honor, there’s one more thing.”

When I paused to let the attorney get his client under control, he raised his hands in absolute surrender. I struggled to keep a straight face while asking his client what he wanted to tell me.

“I just want you to know, your honor, no matter how you rule, I’m going to buy your book.”

Although I kept it together on the bench, I went home that night knowing I had to make a big decision –continue in my safe and secure job or throw it away to follow my passion. Although I couldn’t predict how a writing career would turn out, I knew if I stayed healthy for twenty to thirty years, there was time to follow a dream. Then again, on the other side, the last two judges to retire after very satisfactory careers were eighty-eight and eighty-six, respectively. 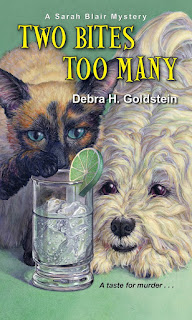 Passion won. I took the leap. As a writer, I may never achieve the financial security of my judgeship, but four published books, including Two Bites Too Many, the recently released second book in Kensington’s ongoing Sarah Blair cozy series, and thirty plus short stories later, I’m having a ball.
~ ~ ~ ~ ~
Judge Debra H. Goldstein writes Kensington’s Sarah Blair mystery series (One Taste Too Many, Two Bites Too Many). She also wrote Should Have Played Poker and IPPY winning Maze in Blue. Her short stories, including Anthony and Agatha nominated The Night They Burned Ms. Dixie’s Place, have appeared in numerous periodicals and anthologies. Debra serves on the national boards of SinC and MWA, and is president of SEMWA and past president of SinC’s Guppy Chapter. Find out more about Debra at https://www.DebraHGoldstein.com .

Two Bites Too Many – Barnes and Noble -  http://bit.ly/TBTMBarnes
Amazon.com - https://amzn.to/2KBkPis

Email ThisBlogThis!Share to TwitterShare to FacebookShare to Pinterest
Labels: A Sarah Blair Mystery, Debra H. Goldstein, Discover..., Fearless Friday, One Taste Too Many, Two Bites Too Many