Hey, Readers, please welcome Terri Benson back to Discover... She has a wickedly great take on those women of the night that add to the color of the Old West. Enjoy!

I write historical romance, set in the mid to late 1800s. My research has uncovered so many stories of women who were abandoned or widowed, or whose plans for a better life fell apart, leaving them no option but to work in the world’s oldest profession to survive. In The Angel and the Demon you’ll meet the newly widowed Winnie who, even at her age, could have found herself one of them, if she and Angelique hadn’t teamed up. 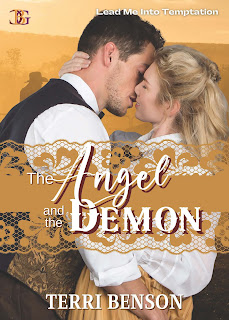 When I wrote The Angel and the Demon, I didn’t know which characters I would actually end up with. Winnie showed up one day, a poor but hard-working woman, and she was the perfect partner for Angelique. Then Francesca and Ebbie strolled into the story and boy, was I surprised, since I hadn’t set out to have prostitutes be important characters. But they revealed themselves to be ordinary women who had been subjected to extraordinarily bad situations and coped as best they could.

Further research into the timeframe revealed wives, mothers, sisters, and daughters who followed Spanish explorers or set up house at military forts, shipping ports, mining communities, railroad towns, and anywhere there was a semblance of community – and sometimes where there wasn’t. It was a rough country and a rough time, causing families to fall apart or circumstances to change, leaving a lot of single females. These women might initially have had hopes of setting up a bakery, or working as a seamstress, finding a husband, or just escaping the drudgery of their lives. Often, they were disappointed, unable to compete with the others who beat them to those businesses, frequently immigrant men. As a result, those women became entrepreneurs in order to survive. They set up business in grand mansions or filthy “cribs” or tents or soddys. They had to contend with violent customers, disease, strait-laced lawmen as well as crooked ones, “decent” women who would go to great lengths to run them out of town, and the sudden demise of western towns.

Many of the women of the night became rich or well-known, including Mattie Silks from Denver. Some became early philanthropists, providing money and supplies when earthquakes or fire ravaged their towns. But the majority worked under appalling conditions and died young.

Finding a “house of ill repute” with a Madam who took care of her girls was not commonplace, although there were some, Like Belle Brezing. I like to think Ebbie would be like that, and she might – when I get around to writing a short story about her life, and Bert’s courting of her.

Angelique Lawson, a naïve 24-year-old spinster, has an injured, murderous train robber dumped on her doorstep with instructions to get him healthy enough to hang. Damon Daugherty, as handsome as he is persuasive, turns out to be the owner of the railroad who was shot trying to stop the robbery, as well as owning a nearby gold mine. Their burgeoning romance is almost derailed by a conniving former companion of Damon’s, but his persistence wins Angelique as his wife. Just when they think they have their happily ever after, a more violent, and persistent, threat comes between them.

A life-long writer, Terri is traditionally and self-published in novel length, with nearly a hundred articles and short stories published – many award winning. She was the Education Chair for Rocky Mountain Fiction Writers for more than seven years, is an irregular blogger (in more ways than one), member of Sisters in Crime, presents workshops at writer’s conferences, and teaches night classes at Western Colorado Community College.  Terri spends her non-writing time working at a Business Incubator, camping, jeeping, and dirt biking with her junior-high-school sweetheart/husband of 40+ years and a succession of Brittany spaniels. You can find more information on her at https://www.terribensonwriter.com/
Posted by Brenda Whiteside at 12:30 AM