Please welcome Sandra Dailey today. Have fun with wicked! And don't miss out on her $.99 special.

Hi Brenda! Thanks for having me on your terrific blog. It’s so comfy. And, I’ve been looking forward to being here on Wicked Wednesday.

I love the word wicked. It can be used in so many ways. It can be used to describe so many things. Where does my romance writer mind go when I think of the word wicked? It goes straight to sexy. That first spark of sexual awareness which unexpectedly hits you in the gut, or somewhere, and builds to a raging inferno. I guess that would make it a combination of 2, 5 and maybe a tiny bit of 1. At last, that’s the direction my mind takes.
After publishing my first book, The Chief’s Proposal, one scene was continually brought up by my readers. I was surprised. This wasn’t the sexiest scene in the book, but it seemed to make an impact. After seven years, people still bring it up to me.
I’ll set up the scene and you can judge for yourself.

Young school teacher, Ginny has entered into a marriage of convenience with Brett, a small-town sheriff. The only thing they know about each other is that they have nothing in common. Before they even talk about consummating the marriage, Brett is shot in the shoulder in the line of duty. This is the first time Ginny catches a look at Brett when he’s, so-to-speak, out of uniform. 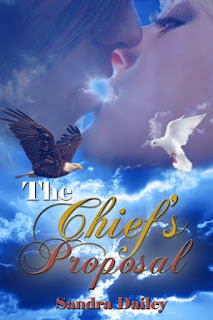 Ginny woke on Monday morning, Labor Day, to the sounds of Bear barking, doors thumping, and Brett cursing. She stumbled into the hall and tried to decide which way to go first; across to the bathroom, to the left where Bear waited to be let out, or to the right where Brett seemed to be having a temper tantrum, or as it was better known in the south, a tizzy fit.
“Both of you just shut up!” she yelled. It was time they realized she wasn’t a morning person. To Ginny’s satisfaction, the house suddenly fell silent. She felt all powerful.
First, Ginny did a quick step to the back door to let Bear out. If she ended up having to clean up a mess, she’d rather it be her own. Once her own most urgent needs were met, she tapped on Brett’s bedroom door. She felt much better and spoke in a sweeter and quieter tone.
“May I come in?”
“I don’t know,” Brett snapped, “do you plan to turn the knob or just kick the door down?”
“You’re safe with me.” Or maybe not. When she opened the door, she caught her breath in a gasp. Brett stood in the center of the room. The only things he was wearing were his arm sling and a pair of black boxer briefs. The tight, stretchy garment dipped low in the front due to the nice way he filled them out. She honestly tried to look him in the eye, but on her way up, her attention was caught by the expanse of dark smooth skin over washboard abs and a wide strong chest. The man was Playgirl centerfold ready.
Brett cleared his throat. “A little help here, please? I can’t get my britches on one-handed.”
Ginny was confused until she saw the uniform pants in his right hand. He needed help dressing and she couldn’t think of who to call. Suddenly it hit her. She was his wife. He expected her to help. Would this fall into the category of for better, or for worse? And what was he doing with his uniform anyway? He’d left the hospital less than twelve hours ago.
“Why are you out of bed?”
“I got lonely,” Brett smirked. “Are you volunteering to keep me company in there? I’d be glad to crawl back in, in exchange for some serious body heat. Who knows,” he winked, “it could be mutually satisfying.”

By the way – The Chief’s Proposal is on sale through the month of August for only 99cents – just in case you’d like to read the rest of the story. It’s still my favorite.

Blurb:
Ginny Dearing has finally realized her goal of teaching, but finding a position is proving impossible. After exhausting all possibilities, an Internet ad is her only hope. In a small town hundreds of miles away there is a job with one huge string attached...a husband.

Burned by love once, Brett Silverfeather finds his bachelor life more than satisfying. He's facing re-election for sheriff, but this time the voters are looking for a family man. Brett finds himself pursuing a marriage he doesn't want.

Ginny and Brett are opposite in every way, but opposites do attract. Can Brett protect his heart as well as he does his town? Can Ginny hide a secret past that could possibly destroy her future?

Have you ever written a scene that people still talk about? Was it wicked?

About me:
Storytelling has always been my favorite way to pass time. I've often been told I should write a book. Finally, I did. It was so much fun: I felt I must write more, so I have.