What's the Worst That Can Happen? by Luanna Stewart #fearless #FridayThoughts #romance

Always a fun guest to have, Luanna Stewart has a humorous, fearless post. Have fun!

I’m one of those people who gets an idea to try a thing and thinks ‘what’s the worse that could happen?’, but then doesn’t worry about the potential disaster because I really want to try the thing.

Many (many) moons ago, I dropped out of college to work as a nanny in England. The earth didn’t leave orbit, nor did I become homeless and forced to wander the moors calling for Heathcliff. (Actually, that sounds kind of fun, doesn’t it?) But nor did I marry the Duke of York – he never returned my calls.

Then I left college again (see a pattern here?) and moved to Baltimore with my then-boyfriend. We lived in a slightly scary neighbourhood (police helicopters were forever shining their searchlights in our back yard) but I survived, have a few great stories to tell, and am still married (34 years) to that boyfriend.

Since then I’ve had lots of ideas, some have been successes (how hard can it be to write a book?) and others have been ‘oh well, better luck next time’ experiences. But I’m always willing and/or eager to try.

We recently built our dream retirement home. Well, ‘we’ didn’t do any of the actual building, the construction crew did all the hard work. DH and I merely supervised and made decisions. (Though there were times I’d have preferred to pound nails than decide where to put the freaking electrical outlets – grrrr.) But we left a few things unfinished because I had the idea we’d work on those things ourselves. Save a few pennies in labour costs and try something new. It would be fun!

Now, there are a few things I have no desire to try, and they involve heights. Step onto a 60th-floor balcony? I’d rather not, thanks. Bungee jump? No, thank you! Skydive? Are you insane?!? Shingle a roof? Uh…

One of the undone projects was building a garden shed. As you may know, a shed is useless without a roof, and a roof needs to be covered in some way to protect it from the elements. Up here in northern climes, we need a roof that’ll survive lots of heavy snow.

And so up the ladder I went.

That’s me without my face blacked out. With me are my daughter-in-love and my long-suffering DH who goes along with most of my great ideas. Son1 took the photo.

As I ascended the ladder I thought about ‘what’s the worse that could happen’. Death was a possibility. The shed is only one story tall but I don’t think that matters if one lands on one’s head. A broken bone would be more likely, or a big BIG bruise.

Luckily no one was injured in the making of this shed – apart from a few skinned knuckles. I perfected my hammering skills, though. And we get to say we built that shed. Proudly, because it’s a nice shed. And we have lots of stories to tell.

I’ve never built a sun deck before either so we did that next.

And since we were successful with the garden shed, we’re now tackling the chicken coop.

Another roofing job is in my future. This roof will be closer to the ground, thank goodness. I really don’t like heights.

What’s the bravest thing you’ve ever tried? Are you a fellow ‘what’s the worse that could happen’ thinker?

Be sure to sign up to my newsletter, Dispatches from Gooseberry Cottage, where I share my latest book news, tantalizing recipes, and photos of all my great ideas.

Bio:
Luanna Stewart has been creating adventures for her imaginary friends since childhood. She spends her days writing spicy romantic suspense, paranormal romance, and historical romance. When not torturing her heroes and heroines, she’s in her kitchen baking something delicious. She lives in Nova Scotia with her patient husband and two spoiled cats. 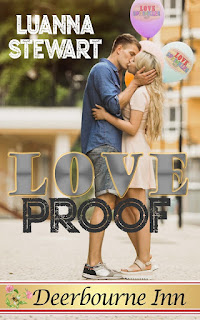 Unemployed photojournalist Raynor Elliot stops at a bakery near the famous Deerbourne Inn. Not only does he get a lead on a job but the bakery’s owner is that awkward kid he knew in high school, only now she has fabulous curves and an irreverent sense of humor. The cozy bakery, with its aroma of sugar, vanilla and spice, has more to offer than tasty cookies.

Fiona MacLeod has been plagued for years by the need to make amends for telling The Big Lie. When the lie’s victim strolls into her bakery with his icy blue stare and killer charm, she feels like she’s standing too close to a hot oven.

Between running her bakery and frosting cupcakes for the Mad River Garden Party, she's pretty sure she's falling in love with this infuriating, sexy man. Can Fiona dredge up the courage to confess, face the consequences, and hope for forgiveness?